Marcus Aurelius Valerius Maxentius Augustus was the son of the Emperor Maximian and his wife Eutropia. As his father became emperor in 285, he was regarded as crown prince who would eventually follow his father on the throne. He seems not to have served, however, in any important military or administrative position during the reign of Diocletian and his father. The He married Valeria Maximilla, daughter of Galerius, and they had two sons, Valerius Romulus (ca. 295 – 309) and an unknown one.

In about 306 AD, Maxentius managed to be recognized as emperor in central and southern Italy, the islands of Corsica and Sardinia and Sicily, and the African provinces. Northern Italy remained under the control of the western Augustus Severus, who resided in Mediolanum (Milan).

(Note: the son listed here, Anwn, is not mentioned in the Wikipedia source.)

Is Maxentius your ancestor? Please don't go away!

ask our community of genealogists a question.
Sponsored Search by Ancestry.com
DNA
No known carriers of Maxentius's DNA have taken a DNA test. 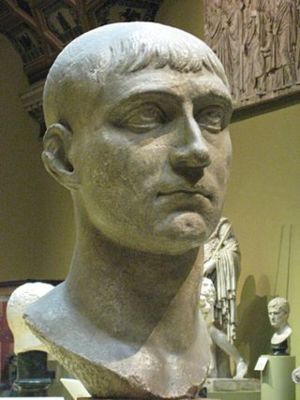