James Walter McCord Jr. (January 26, 1924 – June 15, 2017) was an American CIA officer, later involved as an electronics expert in the burglaries which precipitated the Watergate scandal.

McCord was born in Waurika, Oklahoma. He was a bombardier with the rank of second lieutenant in the Army Air Forces during World War II. He attended Baylor University before receiving a B.B.A. from the University of Texas at Austin in 1949. In 1965, he received an M.S. in international affairs from George Washington University. He began his career at the Federal Bureau of Investigation (FBI), and then worked for the Central Intelligence Agency (CIA), ultimately ascending to a GS-15 position in the Agency's Office of Security.

After resigning from the CIA, McCord was hired in January 1972 for security work at the Republican National Committee and the Committee to Re-Elect the President (CREEP). He and four others were arrested during the second break-in to the Democratic National Committee's headquarters at the Watergate complex on June 17, 1972. The arrests led to the Watergate scandal and resignation of President Nixon.

McCord was convicted on eight counts of conspiracy, burglary and wiretapping and received a sentence of 25 years in federal prison. McCord stated in a letter that his plea and testimony were compelled by pressure from White House counsel John Dean and former Attorney General John N. Mitchell.

The letter implicated senior individuals in the Richard Nixon administration of covering up the conspiracy that led to the burglary. As a result of the letter, McCord flipped and became a cooperating witness and was released for time served. His letter and subsequent cooperation is said to have broken the Watergate case "wide open". 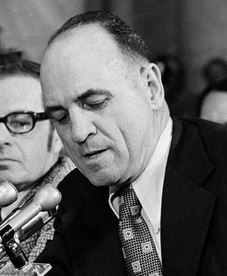 James is 22 degrees from Danielle Liard, 18 degrees from Jack London and 17 degrees from Henry VIII of England on our single family tree. Login to find your connection.