Anne (McCormac) Bonny was an Irish woman who became a famous pirate, operating in the Caribbean.

Anne Bonny was born around the year 1700. Her birth name was Anna McCormac, and her birthplace was Kinsale, County Cork, Ireland. She was the daughter of a servant woman, Mary (or Peg) Brennan, and Brennan's employer, lawyer William McCormac. William moved from London to the British Colony of the Carolinas and changed their name to Cormac. Her mother died shortly after they arrived in North America when she was 12. Her father worked hard to establish himself as an attorney, but found he was better at the merchant business in the new world.

Anne grew up fiercely independent and was known for her fiery temper. It was reported that she stabbed a servant girl with a table knife once for some unknown reason. It was also rumored that she set fire to her father's plantation, although there does not appear to be solid evidence to support this. At a young age (likely between 14-17), Anne married a poor sailor and small-time pirate named James Bonny. She and Bonny ran off to Nassau as privateers, but apparently took advantage of the new Governor's pardons, as James Bonney reportedly became an informant to Governor Woodes Rogers in the summer of 1718.

Anne began hanging out in the taverns with the local pirates, and took up with Captain John "Calico Jack" Rackham. She and Captain Rackham ended up having a child in Cuba, although what became of this child no one knows. Based on rumors and some available sources, it is likely that Anne went on to divorce her husband and marry Captain Rackham, although little evidence survives to prove the tale.

In October 1720, Anne Bonny and other pirates were captured and taken to the Admiralty Court in St. Jago de la Vega, Jamaica, where they were convicted and sentenced by the Governor of Jamaica to be hanged. According to the report, the men were too drunk to fight, but Anne and her friend Mary Read fought fiercely and could have won had they received any help from the men, who hid like cowards in the hold while the women tried desperately to fight off the advancing forces. When Rackham came to her just before his execution, she told him, "Had you fought like a man, you need not have been hang'd like a dog." In accordance with English common law, Anne received a temporary stay of execution until she gave birth. There is no historical record of Bonny's release or of her execution.

David Cordingly's entry on Anne Bonny in the Oxford Dictionary of National Biography, 2004, has it that Anne's influential father obtained her rapid release and she returned to Charles Town, South Carolina, where she gave birth to Rackam's second child. On 21 December 1721 she married a local man, Joseph Burleigh, had eight more children and became a respectable woman. She lived on in South Carolina to the age of 84 and was buried there on 25 April 1782.

ask our community of genealogists a question.
Sponsored Search by Ancestry.com
DNA
No known carriers of Anne's ancestors' DNA have taken a DNA test. 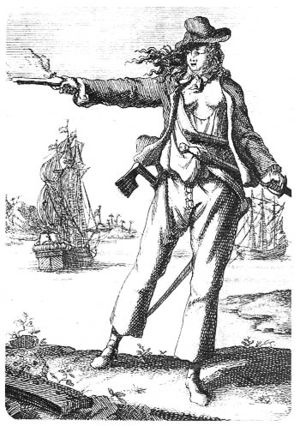 Peter Roberts
It woud be nice if there was an original source for information on Anne's last marriage, family, and death found on page 72 at https://books.google.com/books?id=HlYVBAAAQBAJ&pg=PA68&lpg=PA68&dq=William+Cormac+Kinsale&source=bl&ots=bu55zUlZsa&sig=2mkJ-5W3yQLgEXaUlTER18lkaiY&hl=en&sa=X&ved=0CC0Q6AEwBWoVChMIiID_pJiayAIVjbgeCh2gfAYZ#v=onepage&q=William%20Cormac%20Kinsale&f=false
posted Sep 28, 2015 by Peter Roberts

Categories: Collaborative Profile of the Week | The Bahamas | Pirates