Samuel was the son of John McCullough and Mary Catherine Campbell, born 1705 in Mamacullen, Aamagh, Ulster, Ireland. The immigrated settling in near Philadelphia, Pennsylvania[1]

J. H. Newton, G.G. Nicols, and A. G. Sprankle, HISTORY OF THE PAN-HANDLE, West Virginia, 1879, pp. 134-135; Ohio County Library, http://www.ohiocountylibrary.org/wheeling-history/4298, contributed by Linda Cunningham Fluharty.
THE M'COLLOCH FAMILY - Among the earliest settlers in Northwestern Virginia were the McCollochs, who emigrated from the south branch of the Potomac, in 1770, and located on the borders of Short creek, stream which empties into the Ohio river nine miles north of Wheeling creek. The family consisted of four brothers. Abraham, George, Samuel and John, and two sisters, one of whom Elizabeth, was the wife of Ebenezer Zane, who, with his brothers Jonathan and Silas, came from the same neighborhood, and settled at the mouth of Wheeling creek.
The father of the McCollochs, whose name was also Samuel is said to have been sent by the government some time previous with a number of men from Alexandria over the Allegheny mountains to Fort Pitt. History only speaks of the settlement of the four sons and two daughters, but the present descendants assert that the father accompanied them down the river with the Zane's in the spring of 1770, and that after settling them upon the ridge bordering on Short creek, he with his wife, returned to his native place across the mountains and after some years was taken off by the yellow fever.
(KJW note: Father is John, grandfather is Samuel- father died after trip over mtn)

MAJOR SAMUEL McCOLLOCH
S. Myers, MYERS' HISTORY OF WEST VIRGINIA, Volume 1 (The Wheeling News Lithograph Company), Chapter XVIII, pages 298-302.
The greater portion of the following information regarding the history of the McCollochs is taken from DeHass' Indian Wars. This sketch relates principally to Samuel McColloch, though, incidentally, other members of the family will be mentioned in this chapter. There were two Major McCollochs -- John and Samuel -- and for a time it was erroneously believed by many that John was the one who made the famous leap over the precipice at Wheeling at the point now known as McColloch's Leap. But DeHass has produced evidence which shows conclusively that Samuel was tbe hero of this episode. It might seem strange to us at this time that there could be any question about the identity of persons so well known as the McCollochs were in and about Wheeling. But when we consider the fact that but few written memoranda were made by the first settlers, and these were usually of such vague natures to often cause confusion, and that the rest of our information has been handed down by word of mouth from generation to generation, dependent upon fickle memory, it is not strange that discrepancies occur here and there in the annals of West Virginia.

The McColloch family, we are told, was one of the earliest that settled on Short Creek. There were originally three brothers, Abraham, Samuel and John, and two sisters. Colonel Ebenezer Zane married Elizabeth, "whose life was a model of gentleness, virtue and love. Of the brothers, no men were more respected by their neighbors, or more dreaded by the Indians. Abraham was the eldest, Samuel next, and John the third." Samuel was a noted Indian scout and hunter and in this capacity he had but few, if any, superiors. To such scouts as Samuel McColloch, Lewis Wetzel, Ebenezer Zane, Daniel Boone, and a few others of their kind, the early settlements often owed their very existence, for these settlements could not long have survived the frequent attacks of the savages had it not been for these faithful "watch dogs" of the forests. But there was a large territory to guard; the foe were many, and comparatively few competent scouts. It can not, therefore, be considered strange that the Indian's sometimes slipped by unnoticed by these scouts, and the first notice or warning the settlers had of their presence was the terrible savage war-cry. As a mark of appreciation of his services, Samuel McColloch was commissioned Major in 1775.

Reference has been made elsewhere in this book to the part taken by our hero in the battle between the whites and the savages at Wheeling, September 2nd, 1777.

It will be remembered that the Indians drove the gallant Major to the summit of a lofty hill, which overhangs the present city of Wheeling, now known as McColloch's Leap. Realizing that if he should not succeed in escaping his savage pursuers his fate would be sealed, he strained every muscle of his noble steed to gain the summit and then escape along the brow in direction of Van Meter's fort on Short Creek. Having reached the top, he galloped ahead of his pursuers until he reached the point of the hill near the late crossing of the old Cumberland road. Here he encountered a large body of Indians who were just returning from a plundering expedition among the settlements.

This placed him in a very critical situation. Escape seemed almost an impossibility, either in the direction of Short Creek or back to the bottom. The hill at this point is about three hundred feet in height, and at that time was, in many places, almost perpendicular. The savage horde was pressing upon the Major, determined upon his capture. To hesitate longer meant sure death at the stake. To leap over the fearful precipice seemed equally fatal; so quickly adjusting himself in his saddle, grasping securely the bridle with his left hand and supporting his rifle in the right, he forced his horse to make the leap! Down, down, they went, crashing through timber and tumbling over rocks, while the savages peered over the precipice, no doubt in hopeful expectation that their bitter enemy had at last been killed. But to their wonder and amazement, they saw the invulnerable Major on his white steed, galloping across the bottom, safe from pursuit!

Many other interesting stories of adventure are told of the Major, but they are not sufficiently authentic to warrant our repeating here.

"Towards the end of July, 1782, indications of Indians having been noticed by some of the settlers, Major Samuel McColloch and his brother John mounted their horses and left Van Meter's fort to ascertain the correctness of the report. They crossed Short Creek and continued in the direction of Wheeling, but inclined towards the river. They scouted closely, but cautiously, and not discovering any such 'signs' as had been stated, descended to the bottom at a point on the farm owned by the late Alfred P. Woods, about two miles above Wheeling, They then passed up the river to the mouth of Short Creek, and thence up Girty's Point in the direction of Van Meter's. (Note: Girty's Point is a short distance of from the Ohio River, and is the abrupt termination of one of the elevated ridges. It derived its name from Girty, the white renegade. It was his favorite route into the interior. The path first made by the Indians is still in use by the people of the neighborhood. -DeHass).

"Not discovering any indications of the enemy, the brothers were riding leisurely along, on July 30th, 1782, and when a short distance beyond the point a deadly discharge of rifles took place, killing Major McColloch instantly. His brother John escaped, but his horse as killed. Immediately mounting that of his brother, he made off, to give the alarm. As yet no enemy had been seen; but turning in his saddle, after riding fifty yards, he saw the path was filled with Indians and one fellow in the act of scalping the unfortunate Major. Quick as thought, the rifle of John was at his shoulder, and in an instant more the savage was rolling in the agonies of death. John escaped to the fort unhurt, with the exception of a slight wound on his hip.

"On the following day, a party of men from Van Meter's fort went out and gathered up the mutilated remains, of Major McColloch.

"Major John McColloch was, perhaps, quite as brave and true as his brother. He did ample service in the cause of our long struggle for independence, and a more devoted patriot could not be found. He filled many important posts of honor and trust and was generally respected. The early records of Ohio County show that he acted a conspicuous part on the bench and otherwise. [4] 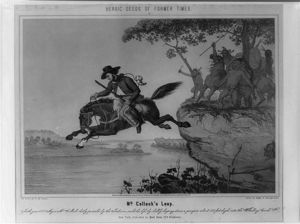 Teresa Downey
This profile speaks of death in 1748 and death in 1782.... Please note there is another Samuel McCulloch : McCulloch-81
posted Jun 11, 2020 by Teresa Downey