"Lemmie", as he was often called by his sister, Annie,[1] was born in Dorchester, New Brunswick to Samuel W. McDowell and Mary Ann Waddell, both from Prince Edward Island. Later, the family moved to Spring Hill, Nova Scotia. Not long after his father's tragic death in 1903, the result of an explosion of the Post Office's hot water boiler, the family moved to the British Columbia.

Lemuel[2] worked as a gas engineer in North Vancouver, BC. On January 14, 1916, he signed up to join the Canadian Over-seas Expeditionary Force to serve in WWI; he was declared medically fit for duty on January 19th; and the next day his enlistment was complete. At the time of his enlistment, he was single and lived at 416 11 St East, North Vancouver (map[3]), with his mother.

According to his enlistment papers, Lemuel was 5'7" tall, with brown eyes, brown hair, and a dark complexion.

Lemuel was a sapper in the Royal Canadian Engineers. In April 1916 he went overseas. Through the course of his duty, he served in Ypres, Somme, and Vimy Ridge in theatre of northern France. In April 1917 he contracted influenza[4] and was hospitalized until August. He briefly resumed training, but then fell ill again in November. He was transferred to the Canadian General Hospital, Eastbourne (No. 14 General Hospital), on the south coast of England. There he died, on November 22.

JLW McDowell is buried in Seaford Cemetery, Sussex, on the south coast of England. The inscription on his grave marker, selected by his mother, reads:

THESE ARE THEY
WHICH CAME OUT
OF GREAT TRIBULATION

(A quote from Revelation 7:14 in which describes the origin of the "great multitude that no one could count, from every nation, tribe, people and language, standing before the throne and before the Lamb".[5])

Following his death, two of his sisters named their sons after him:

JLW McDowell's entry[7] in the Book of Rememberance for the First World War notes that he served in the 12th Field Company (alternatively named the 12th Battalion, Canadian Engineers[8]).

JOHN LEMUEL McDOWELL
Sapper John Lemuel Waddell McDowell, son of Samuel and Mary A. McDowell, formerly resident at Dorchester, N. B., and Springhill, N. S., joined the Canadian Engineers at North Vancouver, B. C., in Jan'y, 1916, and went overseas in April. He entered the trenches in France in August and was at Ypres, Somme and the celebrated Vimy Ridge from Dec. to April, when he came out with trench fever and was taken to England and seemed to recover. Resuming training in August, his heart was found to be affected and taking a hemorrhage he died at Eastbourne Hospital, Nov. 22nd, 1917, and was burried with full military honors at Seaford England, on Sunday, Nov. 25th.
This worthy young man joined the Methodist Church at Springhill. He was always of a cheerful and happy disposition, much loved by those who knew him. His name is on the Honour Roll of the Methodist Church at Ladner, B. C. His commanding officers and hospital officials, writing to his sorrowing friends, paid high tribute to his manly character and devotion to duty.
He leaves an aged mother in Vancouver, a brother, H. S. McDowell in Edmonton, Mrs. R. M. Stevenson and Miss A. V. McDowell, sisters, in Vancouver, 877 Broughton St., and Mrs. C. W. Nelson, a sister, at Ladner, B. C.

Another clipping from his mother, Mary Ann McDowell's notebook:

LADNER UNVEILS ROLL OF HONOR
Public Tribute to Men Giving All for Their Country.
LADNER, B. C., Dec. 13.—Under the conductorship of the Rev. J. F. Stillman, the Methodist Church was the scene of an impressive service on Sunday, when the second honor roll was unveiled, and an "In Memoriam" tribute paid to three of the heroes whose names appear on the roll. Capt. Cecil Weare, Sapper L. J. McDowell and Pte. Basil French, all of whom have given their lives for the cause.

Is Lemuel your ancestor? Please don't go away!

ask our community of genealogists a question.
Sponsored Search by Ancestry.com
DNA Connections
It may be possible to confirm family relationships with Lemuel by comparing test results with other carriers of his ancestors' Y-chromosome or mitochondrial DNA. However, there are no known yDNA or mtDNA test-takers in his direct paternal or maternal line. It is likely that these autosomal DNA test-takers will share some percentage of DNA with Lemuel: 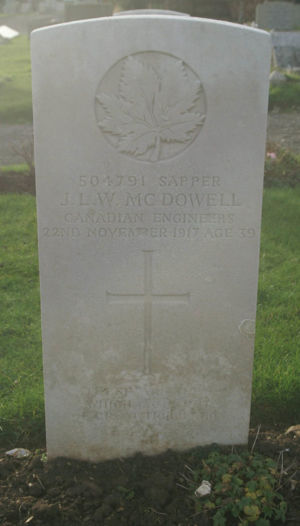