Please NOTE: Research confusion for some on where and when William died or originated from.

This William did NOT die in Limestone, KY. If one were to check the 1783/84 land plat maps for Wheeling - used for tax purposes at the time, one would clearly see the lands are now marked as "Heirs of William McIntyre". This is in keeping with Williams sudden filing of his will in 1782, possibly indication of an injury or ill health. The will was filed in both Pennsylvania and Virginia as the border war between the states still wasn't settled and was on his route traveled many times before as a Wagon Master. {my thinking here on why}. Perhaps it was because he was originally from the area.

Further research to sort death out was performed delving heavily for about a year or so, into historical documents and writings about the conflicts for the time periods, reveal it was Alexander McIntyre, called "Mac the Red" who actually died in 1792. His story will be told as well.

The little bit of Drapers Notes published at the OOcities "now defunct site" makes a statement where someone [a living extended relative over distance] states "that isn't true, I just saw Alexander about xx [double digit] years ago, it wasn't Alexander I think". But... this family has many of the same name, repeatedly for many generations and many branches. Easy to get confused for sure, over time and age.

The first encounter for this researcher on date of death attributed to William was through the old Oocites web site a decade or so ago, as can be seen on "Way Back Machine". The only other item, was then 1st in "A Genealogy of the Duke-Shepherd-Van Metre Family:" No proof to be had, myself and a couple cousins went digging, as we wanted the proof and correct historical facts associated, so our ancestors are never forgotten in history.

DAR records are only as good as the knowledge it was filled out with, which is why DAR put a stop to accepting some applications for lines, barring actual proof. Too many inconsistencies. Much easier to find today given technology, bless their hearts. They also seek to preserve history, may they continue for many years. The records are only clues.

We considered that perhaps his name was William Alexander McIntyre, until I uncovered an old deed/land grant for Wm Nich McIntyre. Shabby condition, but very legible. Diggings in archives. A clue.

William McIntyre also wasn't born in Shepherds Town. Virginia Colony is the best approximation that can be given, based on nothing more than other published gedcoms, writings, land records. Williams father Nicholas didn't live in Shepherds Town until later parts of his life, his 2nd home. Given distance and time period, one wanted to not be traveling with supplies after dark if possible. He originally settled along the mid to upper areas of the "Opekuan", before having small "in towards town land". (Thank-you Virginia DOT for publishing the colonial road creation records found).

There is also speculation that Williams father Nicholas, was the young man in the advert for the indentured slave runaway. This young Nic is related somehow, but not the father of this William. Plotting timeline against all events.

Considering what it took to be a "freeman" able to purchase property of even an acre, much less what Williams father purchased, negates "this scenario" start of the family unit. People weren't free until certain requirements and social striata condition/levels were met. One wasn't free until society said you were. One has to have recommendation letters to visit/join a "church" in another area, yet many held their own services in their homes sans a local priest/reverend/ordained person.. I am considering he knew the Van Metre unit and likewise decided to migrate. The family units were extremely close in migrations as various groups of branches across many areas.

One key to the mystery is that Nicholas, was out of "Cumberland". Which of the 4 surrounding "Cumberlands" might that be though? Virginia, Maryland, Pennsylvania, Maine. They were all Massachusetts Colony control originally, which tells us where to look. [Yes even parts of Pennsylvania, though it was Penns claims]. Have our mat side in there. Fascinating the many peoples, interior and exterior who brought us to now. William could have been born in any one of these same name areas.

Another key is strong DNA matching. Which has been my headache as branches of my moms lines - were branches of my dads lines overseas and in Canadian areas. Evidentially kept merging back together over centuries, all across the "States"... unbeknownst to descendants. As a result, I automatically cut DNA matches in 1/2.

Our DNA matches Charles McIntyre (VA), contemporary of Nicholas. It also matches Micum (ME)... and not by little bits. My theory is Charles was a son of an older brother of of Nics and a cousin to William. A nephew of Nicholas or ... Charles could actually be the uncle given the close age to one another. He can't however be the father or brother of Nicholas if the date of birth estimation is correct for Charles or Nic. But... they are family.

So far as William being linked to Andrew and Margaret Peterson as a son/grand-son... The naming isn't there. There would have been extended fam carrying the name Andrew from the 4 offspring (2 females, 2 males). The immigrant father came here and died early. The name would have carried down. Dates are wrong as well. Extended family.

I suspect two or more persons experiences have been merged into one person over time. Easy enough to do with "same names".

Hope this biography helps clear up some confusion and helps many others in their quest.

Major William McIntyre was mentioned in the Sons of the American Revolution Membership Application for Bernard Peter Resseger.

William died Apr 1792 at Limestone, Kentucky.[4][5] According to the "A genealogy of the Duke - Shepherd - Van Metre family," William was killed-by-nativeskilledbyIndians. 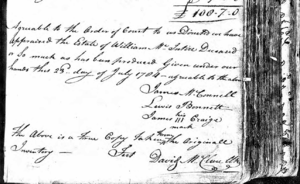