From The Tennessee Encyclopedia of History and Culture

Mary McKeehan Patton, pioneer gunpowder manufacturer, was born in England in 1751 and immigrated with her family to Pennsylvania in the late 1760s. McKeehan served an apprenticeship, possibly under her father, David McKeehan, and learned the art of gunpowder making. In 1772 she married John Patton, an Irish immigrant, who served as a private in the Pennsylvania militia early in the American Revolution.

The Pattons manufactured gunpowder in the Cumberland County region of Pennsylvania. Following the birth of two children, the couple sold their Carlisle powder mill for cash and migrated to the Overmountain region of North Carolina, now East Tennessee. With the help of family friend Andrew Taylor, they established a mill on what became known as Powder Branch, adjacent to the Taylor homeplace.

Patton earned her place in history by providing over five hundred pounds of gunpowder to the 850 Overmountain Men led by Isaac Shelby and William Campbell for the battle of Kings Mountain during the Revolutionary War. Essential to the victory over Major Patrick Ferguson's British troops was Patton's gunpowder. After the war, Patton continued to make and deliver gunpowder to local customers.

On December 15, 1836, Mary Patton died and was buried in Patton-Simmons Cemetery near Sycamore Shoals, Tennessee. The family tradition of gunpowder manufacturing continued until after the Civil War, when the powder mill was sold."

Men from this area fought this battle under Generals Cambell, Shelby and Sevier. Thomas Jefferson said: “The Battle of King’s Mountain was the turning point of the Revolutionary War.”

On Sept. 24, 1780, soldiers stopped at Rocky Mount enroute to Sycamore Shoals to rendezvous for this battle. William Cobb furnished them with rations, horses, and slaves to transport the provisions – also he gave them gunpowder made not far distant by Mary Patton.

After the U.S. won independence from England, Mary Patton continued her trade. She delivered the powder on horseback as far as South Carolina. She received one dollar a pound for it.

One night as she was returning home after delivering powder, a masked man demanded her money. She told him her husband was following not far behind and always carried the money. She evidenced bravery, courage and great strength under all conditions. With the money she earned, she purchased land and, at her death in 1836, she owned around 3,000 acres of land.

The Pattons had five children. Many of their descendants are scattered over the United States, many live in this area. A great great grandson, Prof. Sam Jack Hyder of Milligan College gave this valuable kettle to Rocky Mount.

In 1932, a historical marker was erected at Mary Patton’s grave. Many journeyed to this sacred spot to pay homage to this woman who played an important part in gaining our independence and in building this great nation of ours.

Mary Patton is a real heroine of this period of our history. She was born Mary McKeehan in England in 1751`. Every girl and boy had to learn a trade so Mary learned gunpowder making. She came to Carlisle, Pa., and continued her trade, using the old method of mixing saltpeter, charcoal, and usually sulfur. She married a soldier of the Revolution, John Patton. One of the most brilliant and distinguished men of this part of the country was Brig. Gen. Nathaniel Taylor of Carter County. He and John Patton had become acquainted during the war. Gen. Taylor married a cousin of John, Polly Patton. Evidently he met Mary in this way.

He knew his part of the country – the Watauga – Holston settlement – needed gunpowder. (These early pioneers were fighting the Indians, the English, the French and the Spanish.) He persuaded the Pattons to come to Carter County in 1776. He built a home and a mill for them on what became know as Powder Creek on the edge of Carte and Washington counties.

No more info is currently available for Mary McKeehan. Can you add to her biography?

Thank you to John Phillips and Kitty Smith for contributions to this profile. 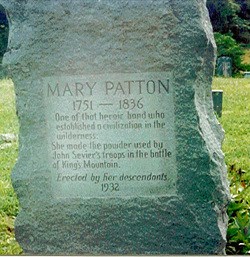 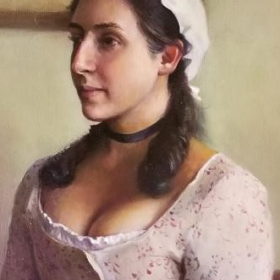 Mary is 21 degrees from Jaki Erdoes, 15 degrees from Wallis Windsor and 17 degrees from Henry VIII of England on our single family tree. Login to find your connection.