Terence Steven "Steve" McQueen was an American actor. Called "The King of Cool", his "anti-hero" persona, developed at the height of the Vietnam War-era counterculture, made him a top box-office draw of the 1960s and 1970s. McQueen received an Academy Award nomination for his role in The Sand Pebbles. His other popular films include The Thomas Crown Affair, Bullitt, The Getaway, and Papillon, as well as the all-star ensemble films The Magnificent Seven, The Great Escape, and The Towering Inferno. In 1974, he became the highest-paid movie star in the world, although he did not act in films again for four years. McQueen was combative with directors and producers, but his popularity placed him in high demand and enabled him to command large salaries.

He was voted the 31st Greatest Movie Star of all time by Premiere Magazine.

He did not like gratuitous violence, swearing or nudity in movies.

He was brought up by his grandparents. A troublesome teenager, he spent 5 years in a Californian reformatory. He ran away from home and worked on ships, as an oil field labourer and fairground barker.

In 1947, McQueen joined the United States Marine Corps and was promoted to private first class and assigned to an armored unit. Although McQueen had problems with authority in the strict Marine Corps and served a tough 41 days in the brig for a 21 day AWOL incident, he was discharged honorably.

Is Steve your relative? Please don't go away!

ask our community of genealogists a question.
Sponsored Search by Ancestry.com
DNA Connections
It may be possible to confirm family relationships with Steve by comparing test results with other carriers of his ancestors' Y-chromosome or mitochondrial DNA. However, there are no known yDNA or mtDNA test-takers in his direct paternal or maternal line. It is likely that these autosomal DNA test-takers will share some percentage of DNA with Steve: 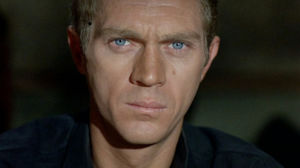