"It is known that Robert McTeer came to survey the land, slept under a beech tree by a spring about where the McTeer marker is, went back and reported it would be a good place to live. So there three families [Bogles, McTeers and McMurrays] came over before the days of the covered wagon and settled close to each other. They left a good place to buid a home in the wilderness. They had not been there long before it was necessary to build a fort for protection, and records show, Robert McTeer built the first fort in Blount County in 1785."

BLOUNT COUNTY lies between the Tennessee River and the great Smoky Mountain, and south of Knox County. It has an area of about 470 square miles, one-sixth of which is mountain land. It is abundantly supplied with water and water power. The principal stream is Little River, which receives the waters of Crooked Creek, Pistol Creek, Nails Creek and Ellejoy. In the southern and western portions of the county are Abram, Nine Mile, Six Mile, Four Mile, Baker and Boyd Creeks. The mineral resources are abundant. In addition to iron and marble, silver and gold are found in paying quantities. The settlement of Blount County was begun in 1785. The first fort or station was established by Robert McTeer. "It stood about one and one-half miles south of Eusebia Church. It soon became the nucleus of an excellent neighborhood of intelligent, worthy, and patriotic citizens, emigrants principally from the valley of Virginia, who brought with, and diffused around them, Republicanism, religion, intelligence and thrift." Among those who located in the vicinity were the BOGLES, McCROSKEYS, McCULLOCHS, McGAUGHEYS, McMURRAYS, BOYDS, CUNNINGHAMS, MOORES, TIPTONS, JEFFRIES, CUSICKS and others. Numerous other forts and stations were soon established in various parts of the county. [1]

This American Patriot is found resting in the Eusebia Cemetery located in Prospect, Blount Co., Tennessee. He served our nation in the American Revolution in the service of the 8th Company of the 1777 – 4th Battalion, Pennsylvania Militia.[3]

I applied to DAR in early 2014, using Robert McTeer as my Revolutionary War Ancestor. All of my application was approved, except for the missing birth and death records of my 2nd great-grandparents. Robert McTeer is in the DAR records, and accepted by them. J. Salsbery 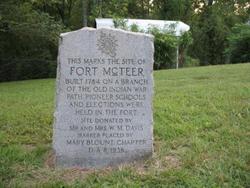 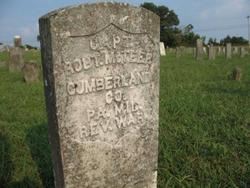 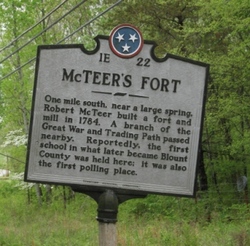 Robert is 20 degrees from Mary McCauley, 23 degrees from B. W. J. Molier and 15 degrees from Henry VIII of England on our single family tree. Login to find your connection.