John Macarthur was a British army officer, entrepreneur, politician, architect and pioneer of settlement in Australia. While a divisive character in the early settlement, Macarthur is recognised as a pioneer of the wool industry that was to become central to the economy of the nation.

John Macarthur was born around 1767 and christened in the name ‘John Mc Arthur’ at Stoke Damerel, Devon, on 3 September 1767.[1] His parents were Alexander and Catherine, both formerly of Scotland.

He married his wife Elizabeth on 6 October 1788 at Bridgerule in Devon. [2]

As a Lieutenant in the New South Wales Corps, he sailed with the Second Fleet to the newly formed Colony of New South Wales in 1790, and his wife Elizabeth and infant son Edward accompanied him. Initially they were on the 'Neptune', but following a duel with the first master of the ship and another disagreement with his successor, the family transferred to the Scarborough before it reached the Cape of Good Hope. [3]The family finally arrived at Port Jackson on 28 Jun 1790. [4]

In 1793, John and Elizabeth established Elizabeth Farm at Rosehill near Parramatta [5][6]and built it up with convict labour of the next few years, so that it was one of the foremost farms in the colony. [4] The farm included the largest flock of fine-wooled sheep.[7] Over this period, six more children were born.

The period was marked by constant disputes and his allegiance to successive Governors was questioned. Finally he was ordered to return to England for court martial in 1801. [4]

John returned to England with two of his children on a journey that took over 12 months. The court martial came to nothing, with advice to the King that the matter should not proceed further and he should return to his regiment in New South Wales. [4]

However, Macarthur had taken some example fleeces with him to England, and the quality of the fleeces and the opportunities for a wool industry in the colony so impressed authorities, in particular Lord Camden the Colonial Secretary, that instead, he was given permission to resign his Army commission and return to New South Wales to develop the wool industry. [4] [7]

Macarthur returned to New South Wales with some of the finest sheep from the Royal flock and the promise of up to 10,000 acres of the best pasture in the Colony. He initially claimed 5000 acres at Cowpastures, south-west of Parramatta. [8]

Macarthur had expanded into merchant and commerical interests during this period and was part owner of a trading vessel. [4] When Governor Bligh was appointed to reign in the excesses in the commerce of the Colony, he soon found himself in conflict with Macarthur. [7]

When George Johnston lead the 'Rum Rebellion' by the New South Wales Corp against Governor Bligh on 26 January 1808, Macarthur was another of the lead conspirators. [10] [7]

Following the coup, Macarthur was appointed to a new position of Colonial Secretary, in which he exercised considerable power until the arrival of Governor Macquarie in 1810 [4]

Meanwhile, Macarthur had headed back to England in 1809, and remained there for eight and a half years, as there was an arrest warrant out for him in New South Wales. In 1817, after years of negotiation, Lord Camden granted him an unconditional return to New South Wales, as long as he no longer participated in public affairs. [4] He was never tried for his involvement in the Rum Rebellion. [7]

In July 1825 Macarthur was one of the three unofficial nominated members of the newly-created Legislative Council of New South Wales. [4] He was residing in the Parramatta district with his wife and children Elizabeth and Emmeline, and a large household of servants and labourers in 1828. [11] 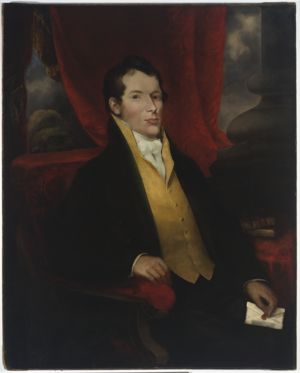 on my father's family side.