Christine and I were talking the other day while on holiday in Renmark about how Dad desperately tried to teach Mum, me and Christine how to reverse a trailer. He was singularly unsuccessful!! He tried quietly instructing us then talking a bit louder and finally yelling at whoever he was trying to teach at the time. He was so frustrated that we could each do all kinds of jobs around the house but not that task.

Thankyou for your phone call and news about dear old Uncle Russell.

It is a blessing for him but it is still hard for Auntie Mary, you and Christine and all the family. Us too.

He was such a faithful servant of Our Heavenly Father. He was the last link with his generation of the Mead family in Australia from Grandpa Mead's arrival 150 years ago.

So many memories come flooding back. When he dressed up as Father Christmas and was wheeled down the road ringing a bell to grandmas in I think Gina's stroller. We were so excited. All our presents were hung on the Norfolk Island Pine. Sitting up in bed with him singing all the choruses from HMS Pinafore and being shut in the bed that opened up, cutting peaches and having our knees squeezed while driving in the truck. How he used to tease Auntie Mary. We used to laugh our heads off. I just loved staying there on holidays and always visited when I was on holidays from Teachers College and when I was teaching.

He and Auntie Mary were so good to Mum especially after Dad died.

ask our community of genealogists a question.
Sponsored Search by Ancestry.com
DNA Connections
It may be possible to confirm family relationships with Russell by comparing test results with other carriers of his Y-chromosome or his mother's mitochondrial DNA. However, there are no known yDNA or mtDNA test-takers in his direct paternal or maternal line. It is likely that these autosomal DNA test-takers will share some percentage of DNA with Russell: 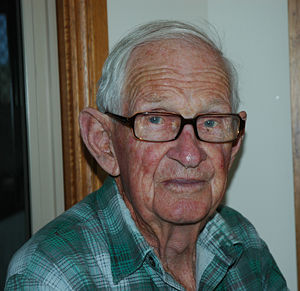