This profile is part of the Mead Name Study.
The Birth Date is a rough estimate. See the text for details.

Mother's Name: The name of John's mother has been uncertain until recently. Early genealogical work by Spencer P Mead contained some errors and omissions which unfortunately persist today. John's mother is identified only as ______ by S. P. Mead (Pg 186). It may be that S. P. Mead left her name out of his account, because he did not understand that Philip was both a male and female name in the seventeenth century.[1]

However, Philip or Philipa or Philippe Mead is now accepted as her name. Remington shows us that "Philip"[1](See Remington, Vol 73, Pg 3) was actually recorded in Stamford town records upon her death. (Her death is recorded at Stamford, Sept. 19, 1657) Donald Lines Jacobus transcribed the Stamford Town Records, and he found her maiden name to be Kilvey, although he did follow this with a question mark and brackets, "indicating that he had trouble reading the original."[1]

John was known as "John Mead, Senior" after the birth of his eldest son by the same name, as evidenced by his will, titled, "John Mead Senior, of Greenwich."[3]

Migrated from England to America

John probably was an infant when he immigrated with his parents, sister, and at least one brother in about 1635. The story that they sailed from Lydd, County Kent, England, in the Ship "Elizabeth," with Captain Stagg, April, 1635, is questionable. John's name does not appear on the ship's list of passengers (in fact, there are no Meads at all).[1]

John settled with his parents in Stamford, Connecticut.[2] Stamford Town Record includes his father's assignment of a five acre home-lot in 1641.[3] In the Spring of 1657, with his brother Joseph, John removed to Hempstead, Long Island, where several Stamford families had newly settled in 1644.[3] After a short time, they both returned, and John finally settled in the Horseneck (Greenwich) area of Connecticut.

We have no records of exact birth dates for most of the children (no record of any birth dates for many). Much of the information comes from John Mead's will and marriage records. The information below is taken from a combination of Beekman Patent, by Frank J. Doherty, and History and Genealogy of the Mead Family, by Spencer P. Mead.

Children from will (Doherty and Mead do not report the same birth order):[2][3]

John wrote his Will March 16, 1695/6.[2] and died 5 February, 1698/9 at Greenwich, Fairfield, Connecticut.[3] He was probably buried at Greenwich Point Cemetery, Greenwich, CT[citation needed] There is a Mead Family Monument which includes father, William, John and two siblings, Joseph and Martha. However it does not include John's mother, Philip. Actual burials have not been found.[5] 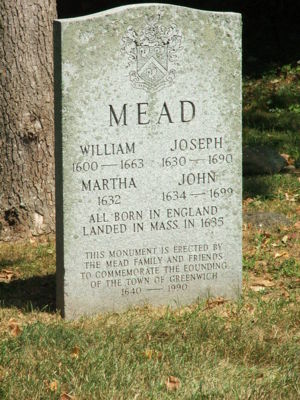 Norm Davis III
Thank you for maintaining this difficult profile. I am working on later generations of the Mead Family in Greenwich. Thanks again!
posted Apr 17, 2018 by Norm Davis III

Cynthia (Billups) B
It is possible that there were some twins, but not necessarily (11 children in about 20 yrs). Most of their birth dates are approximate (guessed by S.P. Mead). Have added what little information we do have for dates of birth on the children.

Part of the problem you are seeing is invented birth dates which are published in online data bases. We only have exact dates for Benjamin and Samuel (sources disagree on Joseph). Any others are fiction or newly discovered (source would be included if this were the case).