The first of the Medici political dynasty, de facto rulers of Florence during much of the Italian Renaissance; also known as "Cosimo 'the Elder'" ("il Vecchio") and "Cosimo Pater Patriae" (Latin: 'father of the nation'). His power derived from his great wealth as a banker, and he was a great patron of learning, the arts, and architecture.

Born in Florence, Cosimo inherited both his wealth and his expertise in banking from his father, Giovanni di Bicci de' Medici. His mother was Piccarda Bueri. Cosimo married Contessina de' Bardi (the daughter of Giovanni, count of Vernio, and Emilia Pannocchieschi). They had two sons: Piero the Gouty and Giovanni de Medici. Cosimo also had an illegitimate son, Carlo de Medici (1430-1492) by a Circassian slave, who became a prelate. On his death in 1464 at Careggi, Cosimo was succeeded by his son Piero "the Gouty", father of Lorenzo the Magnificent or Il Magnifico. 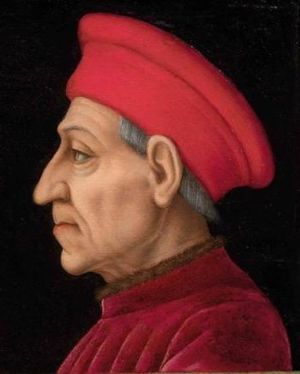 Amie Oliver
These Medici profiles are incomplete. Most of the missing information is of course on the maternal side of the family tree. This makes me sad as most of the information missing is historically KNOWN. I would add this information but as they are pre 1500 profiles editing is blocked.
posted May 09, 2020 by Amie Oliver

John Atkinson
Di giovanni De Medici-1 and Medici-19 appear to represent the same person because: Intended to be the same person, based on family relationships. Medici is the correct Last Name at Birth following European Aristocrat project naming standards. Once this merge is complete then there will need to be a number of merges for descendants
posted Apr 11, 2015 by John Atkinson

Cosimo de Giovanni is 26 degrees from Mary McCauley, 30 degrees from B. W. J. Molier and 9 degrees from Henry VIII of England on our single family tree. Login to find your connection.