This profile is part of the Menzies Name Study.

Egidia Menzies is a member of Clan Menzies.

Egidia Menzies was born in Scotland.

Miss Egidia Charlotte Menzies was born on 14 Feb 1850[1] at Castle Menzies, Weem, Perthshire, Scotland. She was the daughter of Menzies-1076 and Stewart-Alston-1.

By 1901[6] the Scotland Census has Miss Egidia living with her father and household staff at Camserney Cottages. Miss Egidia did not marry.

In 1906[7] after the death of her father and sister Caroline, she moved to live at 23 Royal Avenue, Chelsea, London England,[8] where she resided until her death in 1918.

"Despite various political events and being surrounded by powerful neighbours such as the Campbells of Breadalbane, the Stewarts of Grantully, the Grahams of Menteith and the Murrays of Atholl, the Menzies' managed to maintain their standing and possessions until the estates, the Castle and its contents were auctioned off to pay outstanding debts in 1914. With the extinction of the main line the Clan was left without a Chief on the death of Sir Neil Menzies in 1910. His sister, Miss Egidia Menzies of Menzies was elected Chieftainess by the Menzies Clan Society but did not apply to Lord Lyon Court to become Chief of the Clan. She died in 1918. In 1957 the descendants of the cousin of the first Baronet were successful in petitioning Lord Lyon King of Arms to be recognised as being allowed to use the arms of Menzies of Menzies. The current Hereditary Chief is David Ronald Steuart Menzies of Menzies: Assisted by his son, Robert Ronald Menzies Younger, of Australia. "

To R Hare Hare-1576 and P Gray Howard-18870 for research, compiling, and contact with the Menzies family.

Is Egidia your ancestor? Please don't go away!

ask our community of genealogists a question.
Sponsored Search by Ancestry.com
DNA
No known carriers of Egidia's ancestors' DNA have taken a DNA test. 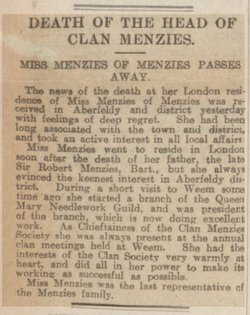 Death of Miss Menzies of Menzies 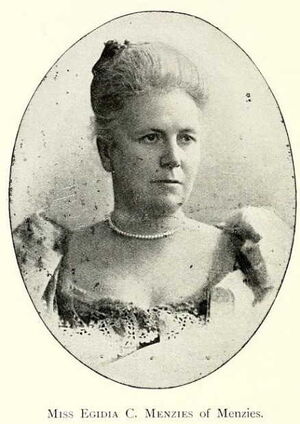 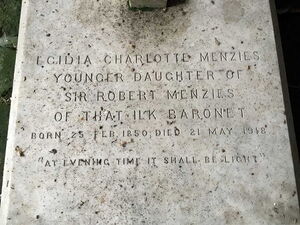