This profile is part of the Menzies Name Study.

Annie (Menzies) Merrylees is a member of Clan Menzies.

Birth Annie was born on 29 Apr 1839 at Shian, Glen Quaich. She was the daughter of Archibald Menzies and Christian Livingstone.[1]

Residences in Scotland Glen Quaich is a glen in West Perthshire, which lies between Strath Tay and Glen Almond, which runs north west from Amrulee for 9 miles (15 km), along the small road branching off the A822. This is a natural pass squeezed between Meall Dearg (2,264ft) and Meall nam Fuaran (2,641ft), emerging at the eastern extremity of Loch Tay.

The hamlet of Amulree in West Perthshire lies close to the geographical centre of Scotland. Along the shore line of Loch Freuchie there are several sites of ruined communities. These communities would have several houses, sometimes a mill and would have been home to perhaps 10 to 15 families.

Most of this development happened in the 18 century when the communities in Loch Tay were being vacated as a result of the new farming and tenancy agreements brought about by the Fourth Marquis of Breadalbane.

Residences in Canada In the early 1800s around three hundred crofters left the Glen to resettle in Canada. After a three month voyage they colonised the Easthope area of Ontario and named their settlements Amulree and Glen Quaich.[2][3]

ask our community of genealogists a question.
Sponsored Search by Ancestry.com
DNA
No known carriers of Annie's DNA have taken a DNA test. 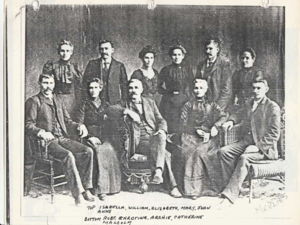 Anthony Hare
Menzies-2531 and Menzies-1693 appear to represent the same person because: Part of the Archibald 1792 duplication
posted Nov 02, 2019 by Anthony Hare