The parents listed for this individual are speculative and may not be based on sound genealogical research. Sources to prove or disprove this ancestry are needed. Please contact the Profile Manager or leave information on the bulletin board.

It is not proven that he is the son of Chilpéric I but he is a descendant in that line.

The "'Liber Historiæ Francorum," calls him the younger brother of Theoderic.[8]

Father: Chilperich I, King of the Franks[9]

TO DO: EDIT TEXT BELOW

Ben M. Angel notes: Someone placed this person as having died at the "Abbaye de St. Vincent" in Paris, and buried in the Cathedral by the same name. First, no such cathedral. There is a church and abbey by the name of St. Vincent, but it's St Vincent de Paul, who lived a millennium after Clothar. The Franks can be argued as being forward looking, but probably not clairvoyant (certainly not to that degree). Death location has been left to Paris. Burial location has been left as unknown.

Clotaire II, d. 629, Frankish king, son of Chilperic I[citation needed] and Fredegunde. He succeeded (584) his father as king of Neustria, but his mother ruled for him until her death (597). In 613, after the death of his cousin Theodoric II, king of Austrasia, he was called in by Austrasian nobles to assume rule. He thus became king of all the Franks. He put Brunhilda to death, restored peace with the help of the nobility, and was compelled to grant (614) a charter giving far-reaching privileges to nobles and clergy. He was also forced to agree that each of the component parts of the Frankish lands, Austrasia, Neustria, and Burgundy, was to have its own mayor of the palace; the mayors of the palace were the chief royal administrators. In 623 he sent his son Dagobert I to be king of Austrasia. Dagobert later succeeded to all the Frankish lands.[2]

The son of Frédegonde, young Clotaire succeeded to the throne of his paternal ancestors' kingdom when his was assassinated in 584. Queen Frédegonde became regent and tutor of the four-month old king.

Though Clotaire's cousin Childebert II tried to conquer the kingdom of Chilpéric's heir and approached Paris with his army, their uncle, king Gontran of Burgundy, supported the young king and his mother, whose extradition was demanded by Childebert. Gontran assured Clotaire's accession and became the guardian of his kingdom.

After Gontran's death, in 593 or 594, Clotaire again fought against Childebert II near Soissons. When Childebert died in 595, Clotaire's armies conquered part of the territory of the kingdom of Austrasia, but in 599 or 600 the new lands and other territories were lost to the Austrasia-Burgundy alliance. However, the discontent among the Austrasian nobility with the Queen Brunehaut (Brunhild), who tried to install the son of Thierry II as king of Austrasia in 613/614, allowed Clotaire to annex Austrasia.

Clotaire enjoyed peace in his kingdom after 613/614 and established his son, Dagobert I, as king of Austrasia in 623. As the elder son of Clotaire, Mérovée was taken prisoner by the Burgundians and killed in 603/604, Dagobert succeeded to the thrones of Neustria and Austrasia after Clotaire's death in 628/629.

He was born shortly after his father's death in 584 and immediately became King of Soissons. His mother ruled on his behalf until he turned 13, when they took possession of Paris in 597. He was attacked by his cousins Theudebert of Metz and Theuderic of Orléans, but defeated them. His cousins attacked again in 600, and were successful. Chlothar fled, and ultimately retained only 12 districts of his former kingdom, the area between the Oise, the Seine and the Atlantic. In 604, he sent an invasion force under his son Mérovic against Theuderic, but the army was defeated, Theudbert occupied Paris, and Mérovic was captured.

Eventually his cousins turned to fighting each other. In 611, he made a pact with Theuderic that he would not give aid to Theudebert. Under the agreement, if Theuderic were to be successful, he would give the duchy of Dentelin to Chlothar. Theuderic defeated Theudebert in 612, and Chlothar occupied the duchy, while Theuderic captured and imprisoned Theudebert, taking his kingdom. The following year, Theuderic died, leaving the two kingdoms to his young son Siegbert II. Later that year, Chlothar had Siegbert II murdered. He annexed the kingdoms of Metz and Orléans, becoming King of the Franks and uniting them for the first time since the death of his grandfather Chlothar I in 561.

In 614/15 Chlothar signed the Perpetual Constitution, also called the Edict of Paris, an early Magna Carta. The charter preserved the rights of Frankish nobles and excluded Jews from civil employment. In 617 he canceled the annual tribute paid by the Lombards.

In 622 he turned over the government of Metz (Austrasia) to his son Dagobert I, whose councillors Arnulf, Bishop of Metz, and Pépin I, Mayor of the Palace of Austrasia thereby gained a degree of autonomy. Chlothar died in 629 and was succeeded by his son Dagobert.

This profile is managed by the European Aristocrats project. WikiTree users are welcome to participate. 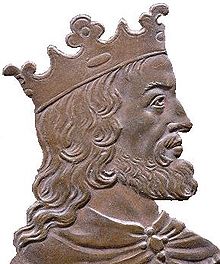 Clotaire II is 39 degrees from Donald Howard, 34 degrees from Julia Howe and 26 degrees from Henry VIII of England on our single family tree. Login to find your connection.