Theoderic, had three (3) children with a woman of unknown origins named, Chrothechildis "Rothilde" (d. 692 or after):[5]

Theuderic III (or Theuderich, Theoderic, or Theodoric; in French, Thierry) (654–691) was the king of Neustria (including Burgundy) on two occasions (673 and 675–691) and king of Austrasia from 679 to his death in 691. Thus, he was the king of all the Franks from 679. The son of Clovis II and Balthild, he has been described as a puppet — a roi fainéant — of Mayor of the Palace Ebroin, who may have even appointed him without the support of the nobles. He succeeded his brother Clotaire III in Neustria in 673, but Childeric II of Austrasia displaced him soon thereafter until he died in 675 and Theuderic retook his throne. When Dagobert II died in 679, he received Austrasia as well and became king of the whole Frankish realm.

He and the Neustrian mayor of the palace, Waratton, made peace with Pepin of Heristal, mayor of the palace of Austrasia, in 681. However, on Waratton's death in 686, the new mayor, Berthar, made war with Austrasia and Pepin vanquished the Burgundo-Neustrian army under Berthar and Theuderic (a Neustrian) at the Battle of Tertry in 687, thus paving the way for Austrasian dominance of the Frankish state. [2]

This profile is managed by the European Aristocrats project. WikiTree users are welcome to participate. 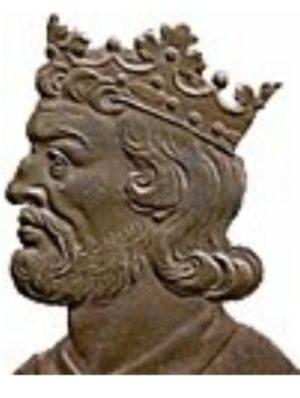 Theuderic III is 37 degrees from Donald Howard, 31 degrees from Julia Howe and 23 degrees from Henry VIII of England on our single family tree. Login to find your connection.