Charles was born c. 1650 at Lancaster County, Virginia.[1] He was the youngest son of John Merryman and his wife, Audrey (who later married to Edward Carter).[2]

Charles was a brother of William Merryman (eldest brother)[2] Some report a sister, Elizabeth Merryman,[citation needed] but Boyd reports only sons.[1]

The Maryland Historical Magazine article, "Merryman Family." points out there is record of several men named Meriman or Merryman in 17th Century colonial Virginia, and it is unknown whether any of them were related to Charles Merryman.[2]

Mary (Hale/Heale) King was the mother of at least one son by Henry King. A Henry King (will dated 18 Jan 1717, Baltimore Co) "appears to have been the step-son of Charles Merryman."[3]

Note: because of the confounding of the wills of Charles Sr. vs. Charles Jr. (see Death and Legacy below), the children reported may actually be the children of Charles Jr. Dates would seem to support this (that these are actually the grandchildren of Charles, Sr). Charles, Jr must have been born before about 1679 (probably some years before), as he was on the taxables list in 1695 (labor was considered taxable at age 16). His younger sister married in 1722, at least a 43 year difference.

Son Charles Merryman, Jr (along with Charles, Sr) appears on the taxables role for Baltimore County for the first time in 1695.[2] In 1714, Charles deeded property to his "second son," John Merryman and to his "young son," Samuel Merryman.[2]

Children of Charles (or possible of Charles, Jr?):[2]

"Also in the Virginia records we find the likely reason why Charles Merriman left Virginia and came to Maryland."[3]

There is disagreement about the death dates of Charles and his son by the same name. They died only three years apart. According to Shirk, Charles Sr. died first and was buried on 17 May 1722: left a will dated 25 December 1720 which was proved on 23 January 1722.[4]

According to Shirk, his son, Charles Merryman, died soon thereafter, probably before the age of forty, on 22 December 1725 at St. Paul's Parish, Baltimore, Maryland (Liber A, Folio 893).[4] 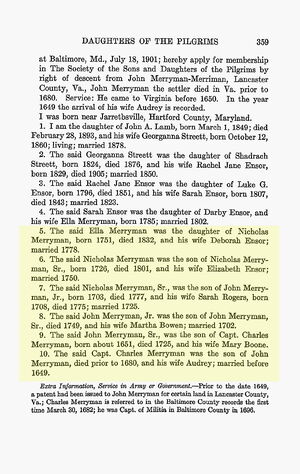