Bolesław (Bolesław I) "Chrobry, the Brave, Prince of Poland, King of Poland" Polski formerly Mieczslaw aka of Poland
Born about 0967 in Poznan, Poland

Boleslaw I was the child of Mieszko I van Polen and Dubrawka van Bohemen. Boleslaw I passed away in 1025.

"Bolesław I the Brave (Czech: Boleslav Chrabrý; Polish: Bolesław I Chrobry (967 – 17 June 1025), less often known as Bolesław I the Great (Polish: Bolesław I Wielki), was Duke of Poland from 992 to 1025, and the first King of Poland in 1025. As Boleslav IV, he was also Duke of Bohemia between 1002 and 1003. He was the son of Mieszko I of Poland by his wife, Dobrawa of Bohemia. According to a scholarly theory, Bolesław ruled Lesser Poland already during the last years of his father's reign. Mieszko I, who died in 992, divided Poland among his sons, but Bolesław expelled his father's last wife, Oda of Haldensleben, and his half-brothers and reunited Poland between 992 and 995." [1] 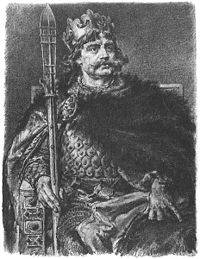 Bolesław I is 29 degrees from Donald Howard, 25 degrees from Julia Howe and 17 degrees from Henry VIII of England on our single family tree. Login to find your connection.