Father of Sherman Miles
Died 15 May 1925 in Washington, DC

Nelson Miles was awarded the Medal of Honor.

MILES, NELSON APPLETON, son of a Massachusetts farmer; merchant's clerk; soldier in the United States volunteer army, 1861-65, from lieutenant to major-general of volunteers, and in the United States regular army, 1865-1903, from colonel to lieutenant-general; was born in Westminster, Worcester county, Massachusetts, August 8, 1839. His father, Daniel Miles, was a farmer and lumber merchant, selectman of the town of Westminster, an earnest, patriotic citizen and a conscientious man of high character and marked integrity. His mother, Mary (Curtis) Miles, was a daughter of Francis and Lidia Curtis, descendant of William Curtis who arrived on the ship Lion, September 16, 1632, and settled in Roxbury, Massachusetts. His grandfather, Joab Miles, was the grandson of the Reverend Samuel Miles (1664-1728) rector of King's Chapel, Boston, whose father, the Reverend John Miles, a Baptist minister, came from Swansea, Wales, to the Plymouth colony in 1663, landed at Weymouth, settled at Rehoboth, Massachusetts, where he was pastor, married Ann Humfrey, was a soldier in the King Philip war, established the first Latin and grammar school in Boston, and died February 3, 1683.

Nelson Appleton Miles was brought up on his father's farm, worked in the fields and forests in the summer and attended the district school in the winter months. He was fond of out-of-door sports and had a special interest in nature and animal life.

He attended the Westminster academy for a short time and when sixteen years old went to Boston to take a place in the china and crockery store of John Collamore & Company. There he attended a night school, and a military school conducted by Colonel M. Salignac, where he acquired his first knowledge of military tactics. He also attended Comer's commercial college. At the outbreak of the Civil war in 1861, he recruited a company of volunteers which was assigned to the 22d Massachusetts regiment, commanded by Colonel Henry Wilson; and when the regiment was mustered into service, September 9, 1861, young Miles was mustered in as captain. He soon after accepted a position on the staff of General Silas Casey who was engaged in organizing troops in Washington, District of Columbia. On November 9, 1861, he was assigned to the staff of General Oliver O. Howard and served that officer, who commanded the first brigade in Richardson's division, Sumner's corps, at Seven Points (Fair Oaks), May 31-June 1, 1862. In this engagement General Howard, finding the 81st Pennsylvania volunteers in pressing need of reinforcement, ordered Captain Miles to lead a detachment to his support, under a heavy fire from the Confederates. Colonel Barlow, 61st New York volunteers, in his report mentioned the exploit of Captain Miles in the engagement, and this resulted in his promotion to lieutenant-colonel of 61st New York volunteers in place of Lieutenant-Colonel Massett, killed in action, and to an assignment to Colonel Barlow's regiment, his commission to date from May 31st, 1862. The 61st New York was with the 64th New York commanded by Colonel Barlow in Caldwell's brigade, in the Maryland campaign, and when Colonel Barlow was wounded at Antietam the command of both regiments devolved on Lieutenant-Colonel Miles and the desperate fighting of the brigade is shown in the official report of forty-four killed and two hundred and sixty-eight wounded in that engagement. He succeeded to the command of the 61st New York on the promotion of Colonel Barlow to be brigadier-general, his commission as colonel dating from September 30, 1862. At Fredericksburg and Chancellorsville he commanded the consolidated 61st and 64th New York regiments in Caldwell's brigade, Hancock's division, Couch's corps, Sumner's grand division, and was slightly wounded at Fredericksburg, where the brigade loss was one hundred and eight killed, seven hundred and twenty-nine wounded and one hundred and fifteen missing. At Chancellorsville, May 31, 1863, he was shot from his horse and the wound was pronounced fatal; he was sent to his home where he was carefully nursed but did not recover until after the battle of Gettysburg had been fought. When he returned to the army, he was still on crutches. He was promoted brigadier-general May 12, 1864; and in the Union army as organized by General Grant for his campaign against Richmond, he was placed in command of the first brigade, Barlow's division, Hancock's corps, Army of the Potomac, under Meade, his old regiment being in his brigade. He fought under General Grant from the Wilderness to the surrender of Lee. In the Petersburg campaign he commanded the first division, Humphrey's second corps; and at Reams Station he repulsed two direct attacks of a large Confederate force directed against his division. He was wounded, for the fourth time, in the attack on Petersburg. He reinforced Warren at Five Forks; and in February, 1865, when but twenty-five years old, he was temporarily in command of the 2d army corps of twenty-six thousand men. He was promoted to the rank of major-general of volunteers October 21, 1865, and was honorably mustered out of the volunteer service September 1, 1866. His brevets were as follows: major-general of volunteers, August 25, 1864 for "highly meritorious and distinguished conduct throughout the campaign and particularly for gallantry and valuable services in the battle of Reams Station, Virginia"; brigadier-general in the regular service March 2, 1867, for Chancellorsville, and major-general for Spottsylvania. He received a medal of honor as provided under act of congress approved March 3, 1863, "for distinguished gallantry in the battle of Chancellorsville, Virginia, May 3, 1863, while holding with his command a line of abattis and rifle pits against a strong force of the enemy until severely wounded; while colonel of the 61st New York volunteers, commanding a line of skirmishers in front of the first division, second army corps."

On July 28, 1866, he was commissioned colonel, United States army, and assigned to the command of the 40th United States infantry, and he accepted the assignment September 6, 1866. His chief service was against the Indians on the frontier. In conducting his campaigns wherever possible he avoided presenting large bodies of troops to view and made such disposition of his troops as to enable him to destroy or capture the foe. He was transferred to the 5th United States infantry March 15, 1869, and promoted brigadier-general, United States army, December 15, 1880, and major-general United States army, April 5, 1890. His achievements in Indian fighting were: The defeat of the Cheyenne, Kiowa and Comanche tribes on the borders of the Staked Plains, Texas, in 1875; the subjugation of the Sioux and Nez Perces tribes in Montana in 1876; a successful campaign against the Apaches in which their chiefs Geronimo and Natchez were compelled to surrender in 1888. With Sitting Bull driven from the United States, with Chief Joseph and the Nez Perces in captivity and Geronimo and Natchez safe from doing further harm, the settlers of Kansas, Montana, North Dakota, New Mexico and Arizona acknowledged their indebtedness to General Miles, their several legislatures passing unanimous votes of thanks for his services. His last campaign against the Indians was in South Dakota in 1890-91, after which time trouble with warlike Indians ceased.

On the retirement of General John M. Schofield, September 29, 1895, General Miles became commanding general of the Army of the United States by virtue of his seniority in rank. He commanded the army sent to Chicago to suppress the Chicago rioters in 1894, and in 1897 visited the scenes of the Greco-Turkish war. He also represented the United States at the jubilee of Queen Victoria the same year. In the Spanish-American war he mobilized the regular army of twenty-five thousand men and formed out of over two hundred thousand volunteers the United States volunteer army which in less than three months with the aid of the navy conquered a peace with Spain, secured independence for Cuba and added to the domain of the United States the Philippine Islands and Porto Rico. He took command of the United States army at Santiago, July 11, 1898, and arranged the terms of capitulation, but left the formality of the surrender to the general in the field. He directed in person the capture and occupation of Porto Rico. In conducting the Spanish-American war he sought to protect the soldiers against the imposition of contractors who furnished to the army unwholesome food, by instituting a searching investigation of the conduct of the commissary department, and thus stopping further issue of worthless meat. He was raised to the rank of lieutenant-general in February, 1901, in pursuance of an act of congress passed June 6, 1900. In 1902-03 he made a tour of inspection in the Philippine Islands. He was retired August 8, 1903, by age limit.

He was married June 30, 1868, to Mary, daughter of Charles and Eliza Sherman, and two children were born of this marriage. Mrs. Miles died August 1, 1904.

He received the honorary degree of LL.D. from Harvard university in 1896 and from Brown university, Providence, Rhode Island, in 1901, and Wayne college, Pennsylvania, 1904. He became a 32d degree Mason, an honorary member of the Union League and St. Nicholas clubs of New York city; the Union League, Illinois, Athletic, Iroquois, and Union clubs of Chicago; the Pacific Union club of San Francisco, California; and a member of the Metropolitan, Army and Navy, and Chevy Chase clubs of Washington, District of Columbia; and a companion of the first class and vice-commander in the Military Order of the Loyal Legion of the United States; a companion and department commander of the Military Order of the Loyal Legion of California. In politics a Democrat, he was made president of the Jefferson Memorial Association in 1903, and was frequently mentioned in Democratic conventions as an available candidate for president of the United States. He introduced the practice of athletics in the United States army. He is the author of "Personal Recollections; or, from New England to the Golden Gate" (1897); "Military Europe" (1898); "Observations Abroad; or, Report of Major-General Nelson A. Miles, Commanding United States Army, of his Tour of Observatin in Europe" (1899); army reports, and contributions to magazines.

In January, 1905, he was detailed lieutenant-general United States army to represent the war department at the capital of his native state, Massachusets, on special request of the governor, to become his military adviser with the general supervison of the military of the state.

Is Nelson your ancestor? Please don't go away!

ask our community of genealogists a question.
Sponsored Search by Ancestry.com
DNA Connections
It may be possible to confirm family relationships with Nelson by comparing test results with other carriers of his Y-chromosome or his mother's mitochondrial DNA. However, there are no known yDNA or mtDNA test-takers in his direct paternal or maternal line. It is likely that these autosomal DNA test-takers will share DNA with Nelson:

Images: 2
Miles during the Civil War 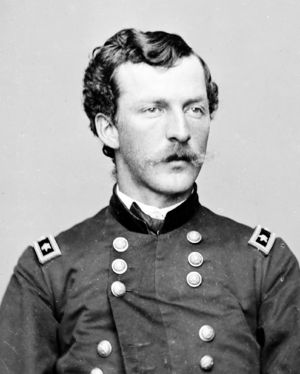 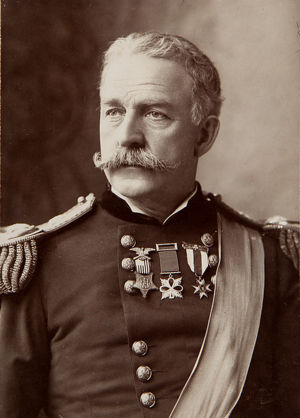 Nelson is 17 degrees from Jaki Erdoes, 15 degrees from Wallis Windsor and 12 degrees from Henry VIII of England on our single family tree. Login to find your connection.