From: History of Virginia, Vol VI, p. 309 "He was a successful wagon maker and eprnt his entire life in Lee Co., actively engaged in his chosen calling. Although prominent and prosperous as a businessman, he did not lose sight of his duties as a citizen and served two terms as deputy treasurer of Lee Co, and was sheriff one term. In politices he was with the democratic party and in his reoigious views was a member of the Methodist Episcopal Church, South. He served throughout the Civil War in the Confederate Army, but was captured at Jonesville and confined at Knoxville, TN. There he was taken sick and later paroled. He was a member of the Odd Fellows.

He was divorced by Diana Stanley Miles.

Is France your ancestor? Please don't go away!

ask our community of genealogists a question.
Sponsored Search by Ancestry.com
DNA Connections
It may be possible to confirm family relationships with France by comparing test results with other carriers of his Y-chromosome or his mother's mitochondrial DNA. However, there are no known yDNA or mtDNA test-takers in his direct paternal or maternal line. It is likely that these autosomal DNA test-takers will share DNA with France: 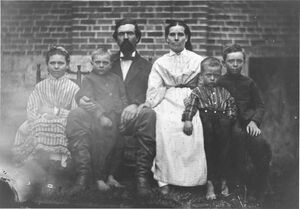 France is 18 degrees from Cecil B. DeMille, 27 degrees from Rosalie Neve and 20 degrees from Henry VIII of England on our single family tree. Login to find your connection.