One of the most famous 19th century English painters. He was also a successful book illustrator.

John Everett Millais was born 8 June 1829 in Southampton, Hampshire, England. He was the son of John William and Mary Millais. He was baptised in All Saints Church, Southampton on 27 December 1829[1]. The Millais were a well-known Jersey family and John William was listed as a gentleman in his marriage allegations, indicating independent means. What they were doing in Southampton is not clear, but they were there for some time as John's elder sister, Emily, was born there in 1826 as was his brother William in 1828. Soon after John's birth though the family returned to Jersey. For a while the family lived in Dinan in Brittany, where John's younger sister, Ellen was born in 1834.

John's talent for drawing was evident immediately and at the age of nine he was enrolled in Sass's Academy at 6 Charlotte Street, Bloomsbury, London[2]. From this date on John spent as much time in London as he did on Jersey.

By 1841, the family was back in Jersey, living in a house on Royal Crescent, off Don Road in St Helier[3]. William, by then 13, was presumably off at boarding school as he is not listed. Emily, John and Ellen were there with their parents and with a servant girl.

At this time John was accepted into the Royal Academy School, aged just eleven. The family moves to London not long after.

In 1846, aged 17, he exhibited his first picture at the Royal Academy: Pizarro seizing the Inca of Peru. It was an astonishingly accomplished piece of work for a teenager.

In 1848, John and two of his young fellow students, William Holman Hunt and Dante Gabriel Rossetti, formed The Pre-Raphaelite Brotherhood. The brotherhood sought a return to the abundant detail, intense colours and complex compositions which they saw as the soul of Italian art before the classicism of Raphael took over.

In 1849, Millais's Isabella and Holman Hunt's Rienzi were exhibited at the Royal Academy, both exhibiting bright colours and non-classical composition. Both have PRB added beside the artist's names.

The following year, Millais exhibited Christ in the House of His Parents at the Academy. It caused a furore for showing the Holy Family and John the Baptist as ordinary and not terribly attractive working people.

Charles Dickens wrote an excoriating review. He described Milais' Jesus as a hideous, wry-necked, blubbering, red-headed boy, in a bed-gown and his Virgin Mary as a kneeling woman, so horrible in her ugliness, that (supposing it were possible for any human creature to exist for a moment with that dislocated throat) she would stand out from the rest of the company as a Monster, in the vilest cabaret in France, or the lowest ginshop in England[4]. He was almost as scathing about Holman Hunt's offering which hung beside it. John Ruskin, the pre-eminent art critic of the time, wrote to the Times to defend them[5]. From this a friendship blossomed.

In 1851, John, then 21, was living with his parents at 83 Gower Street, Bloomsbury[6]. None of his siblings are present. His father was listed a 'Proprietor of Houses', which gives us some idea of the family source of income. There were also two servants listed at the address. Interestingly, there was no profession listed beside John's entry, although he was already well known by this point.

Millais spent most of that summer in Surrey, by the banks of a stream and later in his studio, painting Ophelia. It is one of the great masterpieces of the 19th Century and one of the most beloved paintings in Tate Britain. Poor Elizabeth Siddal spent day after day lying fully dressed in a bathtub to be the model. It was exhibited in 1852 and was given a mixed reception by the critics.

In 1852, Millais painted The Order of Release. It was exhibited in 1853 and was a huge success[7]. John was elected an Associate of the Royal Academy.

The model for the central character of the determined and triumphant wife was the wife of his friend John Ruskin, Effie Ruskin, then aged 24, a year older than Millais. Effie had been married to Ruskin for more than four years and was at the end of her tether emotionally. The marriage had never been consummated for reasons that have been speculated about ever since. Either way, Millais and Effie were in love before the painting was finished.

In the summer of 1853 Millais went to Scotland with the Ruskins and painted John's portrait among the gneiss formations at Glenfinlas. In 1854, Ruskin was added back in the studio in London and by this stage Millais was so in love with Effie that he could barely stand to be in her husband's presence. She had left Ruskin by then, nominally to return to her family in London. In reality she was with Millais.

Effie sued for an annulment on the grounds that John Ruskin was "incapable of consummating" their marriage "by reason of incurable impotency"[8]. It caused a huge scandal but Effie was granted her order of release.

Effie and Millais were married one year later on 5 June 1855 at Kinnoull, Perth in Scotland. Their first child, Everett, was born eleven months later. They went on to have seven more children together.

By 1855 the The Pre-Raphaelite Brotherhood was no longer actively functioning. This was for two reasons: firstly the artists had evolved their styles (except Holman Hunt, who remained true to the ideal for ever) and, secondly, because their manifesto had been accepted and had mostly triumphed.

Millais' ability to tell stories with his art, foretold in his earliest paintings, remained in the foreground.

The Vale of Rest was painted in Kinnoull churchyard, Perth, Effie's family's church. The colours are no longer PRB bright, but the composition is startling. One nun is facing away and digging a grave, while the other stares straight at us. Their relationship and the identity of the deceased are unknown but the viewer cannot help but try to puzzle it out. It is worth bearing in mind that Millais is only 29 when this painting is exhibited.

In 1861, John and Effie were living at 24 Down Street, just off Piccadilly in London (the building was later torn down to make way for the Down Street Station on the Piccadilly line)[9]. He was listed as Painter & Associate of the Royal Academy. Their four children were with Effie's parents in Perth[10].

In 1863 Millais became a full member of the Royal Academy.

In 1871 the family are living at 7 Cromwell Place, South Kensington. John is listed as Artist & Royal Academician[11]. Also listed at their home were five of their children, Millais' brother, William, and five servants.

By the 1870s Millais and Effie are spending increasing amounts of time in Scotland and he is painting more landscapes. However he is also painting more traditional story-telling paintings such as thePrinces in the Tower in 1878.

Millais also painted what what was seen as less worthy art and would now be seen as 'commercial art'. the most famous of these was Bubbles, used by Pear's Soap in its advertising for over a century.

In 1881, Millais was living in a huge house at 2 Palace Gate, Kensington (It is now the Zambian Embassy). With him were his brother, William and his children, Alice and Geoffrey[12]. He was listed as Royal Academician Painter. Also present were a nurse and five servants. It is not clear where Effie was; his daughter Mary was in Perth with the Gray family at Bowerswell House but not Effie.

He was created 1st Baronet Millais, of Palace Gate, Kensington, in the county of Middlesex and of St. Ouen in Jersey on 16 July 1885, the first artist to be honoured with a hereditary title.

In 1891, Millais and Effie were listed together at 2 Palace Gate[13]. With them were their daughter Mary, two grandchildren, Effie's brother, Albert, and nine servants.

In February 1896, following the death of Lord Leighton, he was elected President of the Royal Academy.

Millais died 13 August the same year from throat cancer and was buried in the crypt of St Paul's cathedral in London[14]. 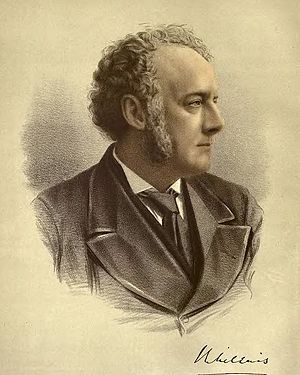 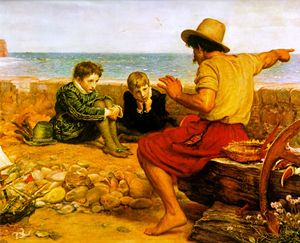 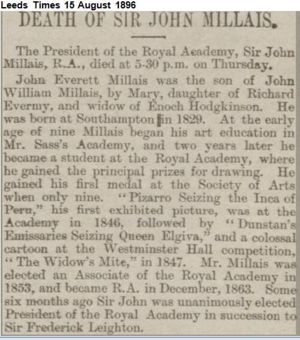 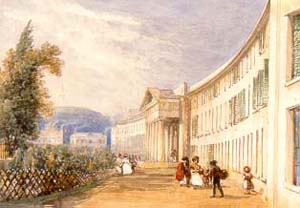 Pizarro seizing the Inca of Peru 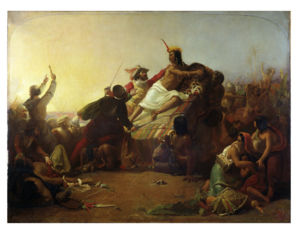 Leave a message for others who see this profile.
There are no comments yet.
Login to post a comment.
[deleted]
I believe Sir JEM to be my great great great grandfather!
posted Jan 19, 2021 by [deleted]

Thank you for posting on John's profile. I'm sure that the profile manager will be looking at that.

You are welcome to use our database and G2G Forum for research. If you are interested in collaborating on the Millais family and contributing to our shared tree, then you should upgrade. There is a link under your name, next to Guest Member on your profile to Upgrade

If you have any questions about how WikiTree works, log into WikiTree and go to your profile. Use the ‘Reply’ link below my comment to be sure I will be notified. Alternatively, click my name to visit my profile, where you can leave a comment, or send a private message.

Jo Fitz-Henry
Fantastic work on this profile Stephen. It is very much an England Project 5 Star profile now.

Gillian Thomas
Hi Nick, I'm just following up the post below and have sent you a message with the instructions for how to add the England Project account as co-manager of this profile. It needs you to do this, as only the profile manager can add another pm to this profile. Please don't hesitate to contact me if you would like to discuss this. We look forward to being able to collaborate with you on this profile. Thanks so much!
posted Mar 19, 2019 by Gillian Thomas

Gillian Thomas
Hi Nick, the England project would also like to take on project management of this profile. Please contact me if you would like to discuss. Thanks, Gillian
posted Feb 21, 2019 by Gillian Thomas