Слободан Милошевић (20 August 1941 – 11 March 2006) was a Yugoslav and Serbian politician who was the President of Serbia from 1989 to 1997. He was charged by the International Criminal Tribunal for the former Yugoslavia (ICTY) with war crimes including genocide and crimes against humanity in connection to the wars in Bosnia, Croatia, and Kosovo.

Is Slobodan your relative? Please don't go away!

ask our community of genealogists a question.
Sponsored Search by Ancestry.com
DNA
No known carriers of Slobodan's ancestors' DNA have taken a DNA test. 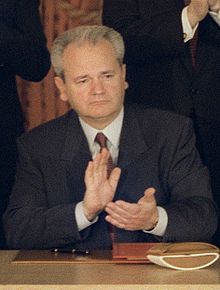