English poet, polemicist, man of letters, and a civil servant for the Commonwealth of England under Oliver Cromwell. Best known for his epic poem Paradise Lost (1667).

John Milton was born on Bread Street, London, on 9 December 1608, as the son of the composer John Milton and his wife Sarah Jeffreys. The senior John Milton (1562–1647) moved to London around 1583 after being disinherited by his devout Catholic father, Richard Milton, for embracing Protestantism. In London he found lasting financial success as a scrivener.

In June 1642, Milton paid a visit to the manor house at Forest Hill, Oxfordshire, and returned with a 16-year-old bride, Mary Powell (1625–1652). A month later, finding life difficult with the severe 35-year-old schoolmaster and pamphleteer, Mary returned to her family. Partly because of the outbreak of the Civil War, she did not return until 1645. They had four children:

Mary Powell died on 5 May 1652 from complications following Deborah's birth.

On 12 November 1656, Milton was married again, to Katherine Woodcock. [1] She died on 3 February 1658, [2] less than four months after giving birth to a daughter, Katherine, who also died.

Milton married for a third time on 24 February 1662, to Elizabeth Mynshull (1638–1728), the niece of Thomas Mynshull, a wealthy apothecary and philanthropist in Manchester. [3]

Milton died of kidney failure on 8 November 1674 and was buried in the church of St Giles Cripplegate, Fore Street, London. [4] 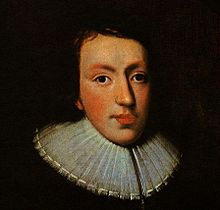 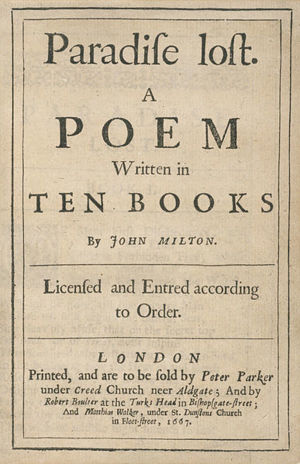 The England Project would like to co-manage this historically significant profile with you. You are welcome to stay on as either a PM or on the Trusted List. Would you please add

to the trusted list, and then set the England Project as a manager.

You can read more about the England Project's managed profiles here: https://www.wikitree.com/wiki/Space:England_Project_-_Project_Protected_Profiles.

Have you had a chance to review my Trusted List request yet? I sent it a week ago.

When I consider how my light is spent, Ere half my days in this dark world and wide, And that one talent which is death to hide Lodged with me useless, though my soul more bent To serve therewith my Maker, and present My true account, lest He returning chide; Doth God exact day-labor, light denied? I fondly ask. But Patience, to prevent That murmur, soon replies, God doth not need Either mans work or His own gifts. Who best Bear His mild yoke, they serve Him best. His state Is kingly: thousands at His bidding speed, And post oer land and ocean without rest; They also serve who only stand and wait.

John is 15 degrees from Donald Howard, 19 degrees from Julia Howe and 12 degrees from Henry VIII of England on our single family tree. Login to find your connection.