Lydia was born in Sharon, Vermont.[1]

Lydia appears in the 1850 Census of Unity, Waldo, Maine, with possible Sister, Altha (17 years her senior), her sisters husband and their son Gus.[2]

In 1900 Lydia is living with her husband Samuel, her children Anna and Maurice as well as her daughter Anna's husband Benjamin Alling and their daughter Marjorie:

Her son Morris was born in 1881. In the 1910 census the 18-year-old is listed as the son of Samuel and Lydia; they would have been 52 and 43. This census has her at age 70, a widowed mother-in-law living with Inez and Charles Frost in Lowell Ward 7, Middlesex, Massachusetts.[5]

Lydia Mitchell died October 28, 1915 of heart disease in Ashburnham Mass. Her parents are listed on her death certificate as Ezra Mitchell and Jodidah Morse. The informant for this information is Mrs. E. E. Livingston who also resided in Ashburnham.

It was previously believed that Lydia's parents were Solomon and Hannah (Wells?) Mitchell but their daughter Lydia S. Mitchell is not our Lydia (Mitchell) Whitten. Both Lydia Mitchells were born in Vermont at about the same time.

This was discovered by T88Chloe (Tom) and noted in this Ancestry.com message board post from March 2011.

Presumably Althea (Mitchell) Coombs is the older sister of Lydia. Given the 16-year difference in ages, Althea could also be her mother, but in this case Althea would need to have remarried. Living in Unity would explain how the Vermont-born Lydia met Samuel Whitten. He was from Unity.

The death certificate, brought to our attention by Harold Mitchell, includes the parents: Ezra Mitchell and Jodidah Morse. This is unequivocal, though we can't rule out that Lydia represented her parents as Ezra and Jodidah, even though they were her grandparents. However, this appears to be a speculation that keeps getting repeated. Unless there is more evidence for it, it should be assumed that the parents are Ezra and Jodidah. Whitten-1 16:30, 16 November 2016 (EST)

Another Lydia in another Untiy

An AncestryDNA autosomal match for Chris Whitten, Barrybuchele, has these Mitchells in his tree, including a Lydia. This would not seem to be the right Lydia, but there's a Unity connection?!

Harold Mitchell shares DNA with Chris Whitten on Chromosmes 3 and 10, with a total cM of 40.7, with Chromosome 3 having the largest segment at 30.6cM.

Harold states that Lydia's parents are Ezra Mitchell and Jedidah Morse. In reviewing the 1840 Census for Ezra there is no female child in his household under the age of 10. If Lydia was born in 1839, one would assume she would have appeared on this Census. Is she actually Altha's daughter?

There is also an Ezra Mitchell, Jr. with a war record for Maine from the Civil War though no Ezra Mitchell is included in Harold's Ancestry information.[8] This Jr. Could or could not be connected to this family.

ask our community of genealogists a question.
Sponsored Search by Ancestry.com
DNA Connections
It may be possible to confirm family relationships with Lydia by comparing test results with other carriers of her mitochondrial DNA. However, there are no known mtDNA test-takers in her direct maternal line. It is likely that these autosomal DNA test-takers will share some percentage of DNA with Lydia: 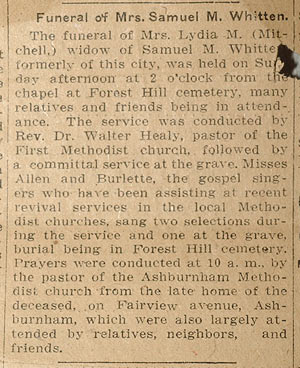 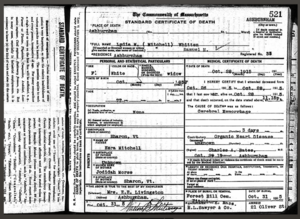 ME Roots just replied to my request for Vermont birth info on Altha and Lydia. I forwarded her reply to you. Nothing on Vermont, not that just finding Altha Coombs' mother (sister?) wasn't exciting. So, for this info, the Whitten descendent will like the S.M.R. Whittten marriage verification. I like that Unity had lots of Mitchell family.

I am using your Webmaster address to get to WikiTree. I found that otherwise but it looked like WikiPedia in format and not like what I first encountered.

In the meantime: since Lydia became a Whitten:

My wife told me for the first time that her grandmother, Florence Manson Reed of Harmony, Maine, said that her mother, Altha (pronounced Al- thee, not "dhee") Coombs Manson, talked about their loss a lot. Lydia, out of the house by 1852, may have heard from Altha Mitchell Coombs about the news.