Sir Thomas Livingstone Mitchell FRS FRGS DCL was born on 15th June 1792 in Grangemouth, Stirlingshire, Scotland. He was the son of John Mitchell and Janet Wilson. [1]

Together with his wife and family, Thomas, then a Major, arrived in the growing colony of New South Wales in 1827, tasked with assisting John Oxley, the Surveyor General, with dividing the colony into counties. There they had a further eight children.

Colonel Sir Thomas Mitchell's funeral was reported extensively in the Sydney Morning Herald, [3] extracts of which are included here:

"After a long official career of twenty-eight years in the public service of the colony, Colonel Sir Thomas Livingston Mitchell, Surveyor-General of New South Wales, died on Friday last, after a painful illness of but a few days, and the grave closed over his mortal remains yesterday, in the presence of thousands of the citizens. The attendance of the civil members of the Government and of the Legislature, of the officers and troops of the garrison, of the leading members of the learned professions, and of the mercantile community, together with the grief expressed by the respectful and sympathetic crowds who lined the whole route from Carthona to the Cemetery at Camperdown, combined to invest the ceremony with extraordinary interest. By the express wish of His Excellency the Governor-General, the funeral was a public one, the civil officers of the Government being invited to attend the ceremony, whilst, in honour of his distinguished services, before the gallant officer entered the civil service of his country, Colonel Bloomfield intimated his desire that Sir Thomas should be buried with military honours; indeed, all that could be devised to surround the ceremonial with the accessories which evinced the earnest desire of every class to pay the last tribute of respect to the deeply lamented, was earnestly suggested.

"Before we conclude our notice of the transactions of yesterday, consequent upon the burial of one of our oldest public officers and colonists, we may appropriately advert to some of the leading incidents of the life of Sir Thomas Mitchell. Descended from an old family in Stirlingshire, he was, at an early age, educated for the profession of arms; and at the sge of sixteen he joined the British army in Portugal, serving as a volunteer. He was present at the storming of the fortresses of Cuidad Rodrigo and Badajos; and Lord Wellington, to whom he owed his first commission, placed him on his general staff. After the war, he was especially commissioned by the Duke to survey the chief battlefields. His recent mapping of the plans will be found adverted to presently.

"It was in 1827 that the English Government determined to undertake the survey and division of New South Wales into counties, and to lay out towns, roads, and reserves for public purposes. Major Mitchell was chosen for this service, and arriving here with the appointment of Deputy Surveyor-General, he, upon the death of Mr. Oxley, succeeded to the office of Surveyor-General. Of his early designs we do not, with our prescribed limits, intend now to speak; although the passage of Mount Victoria, and the cutting of many other difficult passes through the mountains to the interior, together with his well-considered plans of about two hundred towns and villages, may well at a future moment, demand that attention which is due to his great energy.

"So far back as 1831, Sir Thomas L. Mitchell, the Surveyor-General of New South Wales, discovered hills of mica slate and a remarkable mass of quartz rock between the Bogan and the Lachlan, which one of his native guides assured him would be found to contain gold. And in Sir Thomas's subsequently published work upon the interior of this country (Expeditions, vol. 2, p. 13), he described the auriferous character of the dyke which extends from the Lachlan to Hurd's Peak of Oxley. He also described the quartziferous hills in the country between the Lachlan, the Bogan, and the Darling, and expressed his firm belief that, from their geological structure, an extensire gold field must exist in their locality. But Sir Thomas's account of his expedition to Australia Felix (now Victoria), in 1836, where the trapoean conglomerate, with embedded quartz pebbles on the flanks of the granite range of Mount Cole; and the strata of clay slate inclining almost perpendicularly to the horizon, with trap-rock above it, which he found on the banks of the Coliban, in the locality of Mount Byng (now better known as Mount Alexander), emboldened him to speak with the fullest confidence of the vast field which Australia presented for the researches of the geologist and gold miner.

"Sir Thomas was a Fellow of the Royal Society, and Royal Geological Society; and Doctor of Civil Law in the University of Oxford. As a military officer, he stood third on the list of colonels in the British army." 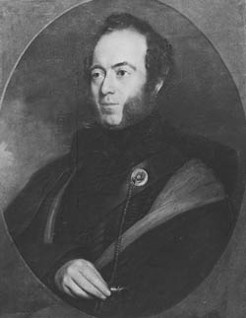