John, his wife and children were killed by Indians during an uprising in Baker county, Florida.

The excerpt below is from a newspaper article written by Mr Gene Barber and published in The Baker County Press, on August 14, 1975. Mr Barber was a well respected and noted Baker County, Florida historian.

"Mr. Tippens was a son of Phillip and Mary Underwood Tippens of North Carolina. His wife was a daughter of David Mizell from Camden (Charlton) Co., Georgia. Mr. and Mrs. Tippens were married in Camden County at Traders Hill on the 22nd of January 1825. She was sister to ancestors of many Charlton, Baker, Union, Columbia, and Union citizens as well as many families in south Columbia. Her father, David, had recently moved to an area in south Columbia County, Florida (thought to be present Union Co.), and Mr. Tippens attempted removal of his family to the Mizell fortified home during an Indian alarm was the beginning of the incident which is related in this excerpt of a letter written by a neighbor to a relative in St. Marys, Georgia.

It is again my painful duty to inform you of a most shocking Indian massacre - I mean the murder of Mr. John Tippins and family. Mr. Tippins was bringing his wife and children out of Florida to see her parents, and when within a few miles of her father's house, was fallen in with about seven Indians, between 10 o'clock, A.M. and 12 o'clock. Mr. Tippens was shot from his horse, the Indians then made an easy capture of his helpless family and vented their savage spleen by beating them on the heads with their tomahawks. Mrs. Tippins lived (senseless) about forty hours, but did not speak; her skull was smashed in many places by the tomahawk. She died in the arms of her father, Mr. David Mizell. Her children are not yet dead, although the skull of each is factured in many places by the tomahawks. This melancholy occasion took place in this county last Monday not far from Ocean Pond."[1]

The Tippins family was buried inside their wagon in South Prong Cemetery, Sanderson, Florida. [2][3]

Is Nancy your ancestor? Please don't go away!

ask our community of genealogists a question.
Sponsored Search by Ancestry.com
DNA
No known carriers of Nancy's ancestors' DNA have taken a DNA test. 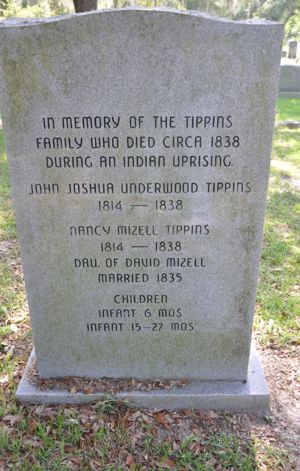