Vaughn, the first son of Ira and Mabelle Monroe was born in Ohio on October 7, 1911. Vaughn's younger brother, William was born in 1915 in Ohio.

After 1920 the family moved to Wisconsin briefly and then to Pennsylvania.

Vaughn’s first singing in public was with his church choir. His original idea was to sing opera. He also learned to play the trumpet at age 11. He won as a teenager the Ohio State Trumpet contest. After high school in 1929 in Pennsylvania, Vaughn worked as an musician in an orchestra to earn money. He attended in 1931 the Carnegie Institute of Technology School of Music. By 1933, he decided to go full time into forming an orchestra. During the 1930s he played the trumpet and sang across the country.

He married Marian Baughman in April 2, 1940. Then immediately formed a Band in Boston in 1940. Next a restaurant /nightclub west of Boston called the ‘The Meadows’ and he was on NBC radio.

His famous song was “Racing the Moon” in 1941 and “Let It Snow” in 1946 along with “Ghost Riders in the Sky“ in the 1950s. Vaughn had 10 number one hits during the 1940s. He also learned to play the trombone for the orchestra. His greatest strength was being a great singer with a deep baritone voice.

The radio show with CBS was the weekly Camel Caravan radio show.

His other interests including flying his own plane and traveling his in boat.

The family moved to Martin County, Florida about 1963, where they lived at 14 West Highpoint Road in Sewall’s Point. He was very generous with his time and money and was very community minded. He donated and raised a good deal of money for Martin Memorial Hospital. Contributions were made to the Cancer Society and to St. Mary’s Episcopal Church in Stuart.

During the 1960s and into the early 1970s he still performed across the country.

Vaughn died May 21, 1973 at Martin Memorial Hospital in Stuart of a stomach disorder (bleeding ulcer) and respirator illness. He was buried at Fernhill Cemetery, Stuart, FL.

There is a special display of photos and memories about the career of Vaughn Monroe in the waiting room at Martin Memorial Hospital.

Is Vaughn your ancestor? Please don't go away!

ask our community of genealogists a question.
Sponsored Search by Ancestry.com
DNA
No known carriers of Vaughn's DNA have taken a DNA test. 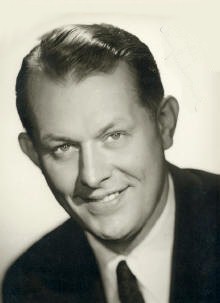 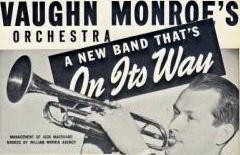