There is nothing found for David except his son, Gordon's Death Certificate from Franklin, Ohio.

Something must have happened to David and his wife Mary Young-Moodie because when Gordon was 2 years old he was living with his Paternal Grandparents, 1841/ 1851 and then in Ohio with his Uncle Thomas, and his wife Jane. and his cousin Isabelle, daughter of Capt John Moodie & Amelia Christie. 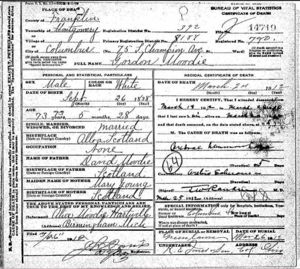