Jessie and Charles Ward adopted Jessie's nephew Wesley Moody after Wesley's mother May Plowman Moody died in 1913 (Jessie's brother Frank, the father of the children, died in 1912). Wesley's brother Robert also lived with the Ward family but he was apparently not formally adopted by the Wards because he kept his surname of Moody. Wesley's surname was changed to Ward by 1920.

Jessie presumably had a daughter named Phyllis with her first husband Murty Douglas Stewart. There is a girl named Phyllis Ward enumerated with the Ward family on the 1920 census. She is listed as the step daughter of the head of household, Charles Ward.

Jessie is buried in the Moody family plot in Linwood Cemetery in Cedar Rapids, Iowa. Her husband Charles Ward is not buried with her. His burial place is unknown.

Read about the death of Jessie's sister-in-law: http://capturedandexposed.com/2020/02/07/family-secrets/

Prior to import, this record was last changed 4 DEC 2010.

Is Jessie your relative? Please don't go away!

ask our community of genealogists a question.
Sponsored Search by Ancestry.com
DNA
No known carriers of Jessie's DNA have taken a DNA test. 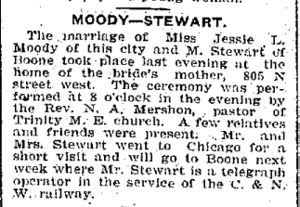