Melezenia was born at Burlington, Vermont, 16 May 1836. She was the daughter of Robert Moody and Adelia Penniman. She passed away 13 July 1902. Conflicting newspaper accounts give Flatbush or Flushing, N.Y., her place of death.

Immediately after her marriage, Melezenia embarked with her husband for San Francisco, where he had a wholesale liquor business. There her first child Charles M. Blackman was born. By 1864 the family was back in Burlington, where Walter P. and Adelia M. Blackman were born; by 1867 they had removed to Brooklyn, New York, where Luther and Oscar H. Blackman were born.

After Melezenia's death she was buried in the Blackman lot in Lake View Cemetery, Burlington. Her large tombstone (years only) mistakenly gives her death year as 1903. It's the only stone with a full name, perhaps reflecting the affection with which she was held. Her husband Oscar has only a footstone (O.P.B.), as do her sons Charles (C.M.B.) and Luther (L.P.B.).

Is Melezenia your ancestor? Please don't go away!

ask our community of genealogists a question.
Sponsored Search by Ancestry.com
DNA
No known carriers of Melezenia's DNA have taken a DNA test. 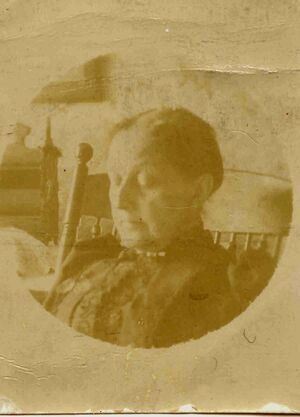