He grew up in Alperton, a suburb of Wembley, in Middlesex, England. [2] During the early 1960s he took up the drums & some lessons from one of the loudest contemporary drummers, Screaming Lord Sutch's, Carlo Little.

In April 1964 at age 17 he auditioned for British rock band "The Who" before they recorded their first single & he remained a member of the band until his death.

AllMusic's Bruce Eder said, "Moon, with his manic, lunatic side, and his life of excessive drinking, partying, and other indulgences, probably represented the youthful, zany side of rock & roll, as well as its self-destructive side, better than anyone else on the planet." [2]

In 1982 he was posthumously inducted into the Modern Drummer Hall of Fame, becoming only the second rock drummer to be chosen. [2]

In 2011 he was voted the second-greatest drummer in history by a Rolling Stone readers' poll. [2] 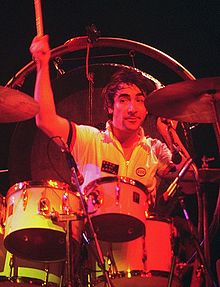 Leave a message for others who see this profile.
There are no comments yet.
Login to post a comment.
G (Redmond) R
Integrating ... with thanks for input from the G2G forum.
posted Jan 14, 2018 by G (Redmond) R