American painter and printmaker of the Hudson River School in New York whose work often featured the Rocky Mountains.

Thomas Moran is born February 12, 1837 in Bolton, Lancashire, United Kingdom. He is a son of Thomas Moran and Mary Elizabeth Higson.[1]

Moran begins his artistic career as a teenage apprentice to the Philadelphia wood-engraving firm Scattergood & Telfer.

By the mid-1850s he is drawing the firm's illustrations for publication rather than carving them. It was then that he encountered illustrated books.

He begins studying with local painter James Hamilton. Moran travels to England in 1862 to see Turner's work. From that point on, he emulates Turner.

During the 1870s and 1880s, Moran's designs for wood-engraved illustrations appear in major magazines and gift oriented publications. Although he masters multiple printing media including wood-engraving, etching, and lithography, which he learns from his brothers, he receives renown for his paintings in oil and in watercolor. The height of his career coincides with the popularity of chromolithography, which Moran uses to make color prints of his works, so that they could be widely distributed.

Moran marries Mary Nimmo. The couple have two daughters and a son.[2][3] 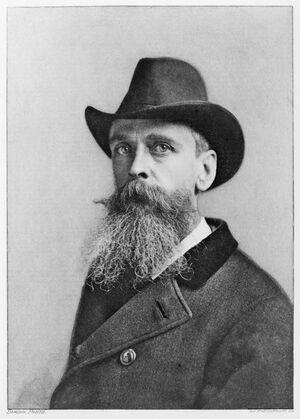