Giuseppe Morello is born 2 May 1867 in Corleone and baptized the next day, named after his paternal grandfather. He is the son of Calogero "Carlo" Morello and Angelina Piazza. His godparents are Giorgio Campagna and Giovanna Vintaloro, a married couple.[1][2]

The following year, Angelina remarries, to Bernardo Terranova, who is a member of the Corleonesi Mafia, called the "Fratuzzi," or "little brothers" in Sicilian.

From Mafia Wiki: "The Morello and Terranova children grew up together and Bernardo may have facilitated Giuseppe's early induction into the local cosca, or Mafia clan." Bernardo Terranova was a member of the Fratuzzi. Bernardino Verro listed him among the members who initiated Verro into the secret fraternity in 1893. His account was found after his murder.[4]

Crichley notes that Morello also had an uncle, Giuseppe Battaglia, who was a leader in the Corleonesi Mafia and who may have assisted in his nephew's passage. This relationship has not been confirmed through genealogical research.[5] Battaglia's wife and Morello are third cousins. Cascio-10 15:10, 14 October 2016 (EDT)

In 1883, Giuseppe's godfather is murdered.

In the late 1880s, while Luca Patti is the leader of his Fratuzzi gang in Corleone, Morello is first heard of as a mafioso of serious repute.[7]

He serves under Salvatore Cutrera, who briefly takes power from Patti. Under Cutrera is Paolino Streva, his captain, and under Streva is Morello, his lieutenant. Streva and Morello engage in cattle theft together.

In addition to his cattle theft ring with Streva, Giuseppe Morello engages in counterfeiting with a Palermitan mafioso. He passes bad bills through Bernardino Verro's socialist cafe. He was tried in absentia and sentenced to six years.[7]

Giuseppe reportedly kills a Sylvan guard, Giovanni Vella, and a witness. (Read "The murder of Giovanni Vella" on Mafia Genealogy.) He flees the country on the SS La Bourgogne, arriving in New York on 9 May 1892. He is 25 years old.[9][10]

Calogero is born on 25 November 1892 in Corleone and baptized on 10 December, named after his paternal grandfather. His godfather is the unmarried Antonino Rizzotto.[11]

Giuseppe's sister, his mother and Bernardo and their children, all follow him to New York in March 1893. Also traveling with them on the SS Alsatia are his wife, Maria Rosa, and their son, Calogero, who is two months old.

The reunited Morello-Terranova family lives first in New York, probably in Little Italy (in lower Manhattan). The financial crisis of 1893 sends Giuseppe south to seek work. In Louisiana, he sells lemons from a sack to pay to relocate the rest of his extended family.[7]

Note: Mike Dash asserts that the child born in 1892 dies in infancy in 1894, soon after the family leaves New York for Louisiana.[7] No primary sources are offered by Dash for the death of young Calogero, and none have been found by this researcher. Cascio-10 17:59, 12 July 2021 (UTC) One secondary source, the 1910 census, supports Dash's theory, but records of Calogero's death in 1912 indicate he is the same person who was born in Corleone in 1892.

Giuseppe's half-sister, Lucia Terranova, marries in Plaquemines Parish, Louisiana, at the beginning of February 1894. (Read "Giuseppe Morello and the Macaroni Wars" which ties together several episodes in Morello's early life in the United States, starting with Lucia's marriage.)

Giuseppe and his stepfather, Bernardo, work for a season on a plantation in Louisiana, probably planting sugar cane. The family moves next to Bryan, Texas, where there is a settlement of farmers from Corleone established on the east side of the Brazos River.[7]

The family lives here for just over a year before deciding to give up sharecropping cotton and return to New York. While living in Bryan, the whole family fall ill with malaria.[7]

Around 1898-99, Morello starts a counterfeiting operation based in an apartment on E. 106th Street. Calogero Maggiore, his distributor, is determined to be the ringleader, and sent to Sing Sing for six years. Morello avoids a sentence.[7]

His parents and siblings appear together in the 1900 census, but Giuseppe is not listed in their household.

In 1901, Giuseppe invites the newly arrived Vito Cascio Ferro to a plate of macaroni.[7]

On the last day of 1902, Morello starts the Ignatz Florio Co-Operative Association Among Corleonesi. He sells shares in the co-op, buys relatively cheap land in the northern part of the county, and builds apartments, then sells them. The Co-op is at first profitable, but has a liquidity problem as it tends to reinvest all capital into new projects.[7]

He is still active in counterfeiting in April 1903 when he has Benedetto Madonia killed by Tommaso "The Ox" Petto. The "Barrel Murder" is investigated by Detective Joseph Petrosino, whose assassination is in part orchestrated by Morello.

Giuseppe remarries, to Nicolena "Lena" Salemi (b. ~1884), on 7 December 1903 at Saint Lucy's Church in New York. The witnesses are Ignacio Lupo and Salvatrice Terranova.[13]

A financial depression in 1907 puts pressure on the struggling building cooperative, prompting Morello to resume counterfeiting.[7]

Sometime in 1907 or 1908, Morello takes a trip to New Orleans where he, as boss of bosses, weighs in on leadership of the local Mafia. He lends his support to Vincenzo Moreci, who becomes the new boss.[16]

In October 1908, Morello begins a counterfeiting operation on an associate, Salvatore Cina's farm in Highland, New York. (Read "Giuseppe Morello's counterfeiting gang" on Mafia Genealogy.) Antonio Comito, the printer whose testimony would devastate the defense at the counterfeiting trial, is abducted in November. Antonio B. Milone, a Co-op officer, etches the first sets of plates used by the gang.[7]

In 1909, Giuseppe Morello is acknowledged by his peers as the "boss of bosses" of the Mafia in the United States.

On 12 March 1909, Joseph Petrosino, the New York police detective, is assassinated in Palermo. Clues point to a collaboration among Morello, Cascio Ferro, and other mafiosi in his murder.[7]

Less than a year later, Giuseppe and his brother-in-law, Ignazio Lupo, are tried in the first of two trials for the counterfeiting gang. Morello gets 25 years in prison.[17]

In the 1910 Census, Angela Morello, age 60, lives in Manhattan, Ward 12, with her daughter, Dora (Salvatrice), 28, son-in-law Nazzio Lupo, 31, granddaughters Nufria, 4, and Angelina, 2, Rocco Lupo, her grandson, born that year, her son Joe Morello, age 42, daughter in law Lena Morello, 26, grandson Charles, 15, born in Texas, granddaughters Angelina, 5, and Carmela, 1, son Vincent Terranova, 23, and daughter Rose Terranova, 17. Nufria, Angelina, and Rocco Lupo, and Angelina and Carmela Morello, were all born in New York. Angelina and her children and in-laws were all born in Italy.[18]

In the 1910 federal census of the US penitentiary in South Bend, Fulton County, Georgia, Giuseppe Morello appears. He is 43, married twice, most recently for seven years. He immigrated in 1892. He works as a helper in the kitchen.[19]

Morello first continues to lead his gang from prison via letter, but soon consents to have the gang managed in his absence by the Lo Monte brothers, Fortunato (also called Charles) and Tom. The brothers are killed in 1914 and 1915, respectively.[9] Giuseppe's brother, Nick, leads the gang after the Lo Monte brothers.[7]

Giuseppe's first son, Calogero, called Charles, is killed in a gunfight in Harlem on 16 April 1912.[20] Giuseppe's second son by this name, with Lena, is also called Charles.

Nick Terranova is killed in an ambush by Camorra from the Navy Street gang in 1916. Vincent and Ciro lead the gang after his death.

In the 1920 federal census of the US penitentiary in South Bend, Fulton County, Georgia, several of the counterfeiters appear in sequence:

64. Giuseppe Palermo, 58 and single, one of the only Morello counterfeiters to become a naturalized citizen, in 1904. He is also a tailor.

Giuseppe is released on 1 February 1920, a few days after this census is taken.[7]

He becomes the right-hand man of Joe "The Boss" Masseria. Masseria, the Morello-Terranova family, and a third mafioso, Umberto Valenti, are allies against the powerful D'Aquila cosca.

D'Aquila has Morello and Ignazio Lupo denounced at a general assembly meeting of the US Mafia, and condemns them to death. They run with Valenti to Sicily around October 1921, where they seek aid from Nicola Gentile.[7]

On their return to New York, Valenti rejoins D'Aquila against Morello and his supporters. Morello's brother Vincent is killed in May 1922. After a retaliatory shooting, Joe Masseria is arrested.[22]

Giuseppe is killed at the age of 63 along with associate Joseph Perriano on August 15, 1930, an early casualty of the Castellammarese War (1929-31) between the enterprises of Giuseppe Masseria, Morello's chief protector and ally, and a rival group led by Salvatore Maranzano and Joseph Bonanno. His address at the time of death is 1115 Arcadian Way, Palisades Park, New Jersey. Also injured in the attack is Gaspare Pollara, a contractor.[7]

Giuseppe's occupation is listed as "contractor". He is buried on 19 August 1930 in Calvary Cemetery.[26] His wife Nicolina (Lena) survives him.[27] In "The Valachi Papers," Maas calls Giuseppe "Peter" and reports his death in his office at at 362 E 116th St. Maas also gives his home address in Palisades Park. He under reports Morello's age at death as fifty.[23]

Is Giuseppe your ancestor? Please don't go away!

ask our community of genealogists a question.
Sponsored Search by Ancestry.com
DNA Connections
It may be possible to confirm family relationships with Giuseppe by comparing test results with other carriers of his Y-chromosome or his mother's mitochondrial DNA. However, there are no known yDNA or mtDNA test-takers in his direct paternal or maternal line. It is likely that these autosomal DNA test-takers will share some percentage of DNA with Giuseppe: 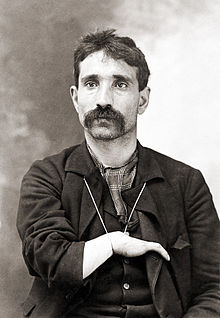 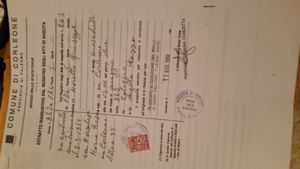