John Morgan was born 1696 in Gwynedd, Montgomery, Pennsylvania, British Colonial America. John married Sarah Lloyd. John and his wife Sarah were of the Quaker faith. They were married at the Gwynedd Meeting House in 1721. In 1741, the family moved to Frederick, Virginia along with several other Quaker families, including the Boones. He died 2 Sep 1746 in Frederick, Virginia, British Colonial America.

1721 Minutes of Gwynedd Monthly Meeting: '3rdly Application being made on behalf of John Morgan for a Certificate to Haverford Monthly Meeting in order to proceed in Marriage with one Sarah Lloyd belonging to the said Meeting. John Jones and Cadwalader Foulke to make Necessary Enquiry and to write one agst next Meeting. 1st The friends Appointed last Meeting laid Down one Certificate for John Morgan.'[2]

'9-8, 1721. Marriage of John Morgan, son of Edward of Gwynedd, and Sarah Lloyd, daughter of Thomas of Merion. Witnessed by Dorothy Morgan (wife of Morgan Morgan), Edw. Morgan, William Morgan, Daniel Morgan, Sarah Boone,Squire Boone and others. (It was in North Wales hamlet, Pennsylvania, that Squire Boone met Sarah Morgan and married her in 1720 in a Quaker meeting house.)'[3]

Move from Pennsylvania to Virginia

'In 1741, John Morgan (son of Edward) and his brother Joseph received a certificate of removal from the Gwynedd Meeting to the Hopewell Meeting in Frederick County Virginia, and moved there in the 1740's. One source says he acquired land in Martinsburg, but no records have been found. Martinsburg was in the northern third of Frederick County that became part of Berkeley County in 1772, and in 1863, part of West Virginia.'[4]

We know a bit about the guardian William BALDWIN, who took William and Morgan Morgan into his home after John died. Records of Stewart Baldwin (as found in his 1995 manuscript of Edward Morgan's descendants) showing WILLIAM BALDWIN was married to an Elizabeth. They had lived prior in Frederick Co VA where Elizabeth Morgan migrated with her parents from Philia Co PA. Later this couple moved to Rowan Co NC near Squire and Sarah (Morgan) Boone. This is also where we find other orphans of John Morgan. One of these orphans, William Morgan, in 1767 had WILLIAM BALDWIN as a witness for his deed for 200 A [acres] in Rowan Co NC. Bk 6 p.593 [record cited in Mc Cubbins Collection; Moberly-Morgan].[6]

This same WILLIAM BALDWIN was guardian for Morgan Morgan. '16 Aug 1747 Morgan Morgan heir at law of John Morgan dec'd being upon his petition admitted to choose his guardian, made choice of Joseph Morgan & William BALDWIN.' [7]

"Frederick County Court records show that John was deceased by 5 May 1747, and a certificate for obtaining letters of administration on the estate of John Morgan was granted to his widow Sarah Morgan, along with his daughter Sarah, his brother Joseph, and someone named James Davis.[9] 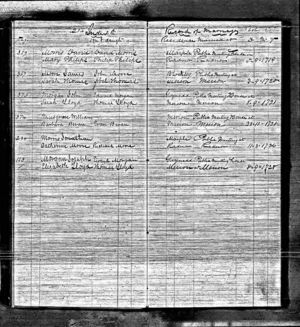 Leave a message for others who see this profile.
There are no comments yet.
Login to post a comment.
Ken Morgan
I question the birth year and location [Wales-1694] for John as all the other children of Edward Morgan were born in PA. Daughter Elizabeth was also born that year in PA?
posted Mar 27, 2019 by Ken Morgan