Sir Thomas Morgan was born about 1540 in Llaurhynmy, Monsmouth, Wales. Sir Thomas Morgan (died 1603) was an English Member of Parliament. He was the eldest son of Sir Rowland Morgan of Machen, Monmouthshire and educated at the Middle Temple. He inherited Tredegar House from his cousin Miles Morgan, who had died at sea after inheriting it from William Morgan. [5]He was the father of Sir William Morgan. He died about 1603 in Tredegar, Monmouthshire, Wales. [6][7]

From Wikipedia, the free encyclopedia Sir Thomas Morgan (died 1603) was an English Member of Parliament. [1]

Thank you to Sheldon Sickler for creating WikiTree profile Morgan-5856 through the import of Sickler Family Tree(2).ged on Nov 5, 2013. Click to the Changes page for the details of edits by Sheldon and others.

Images: 3
A history of the family of Morgan p20 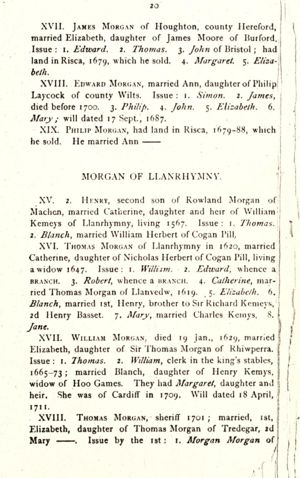 A history of the family of Morgan 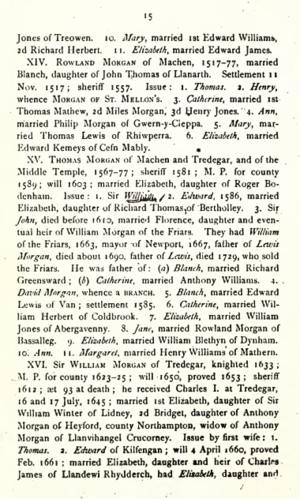 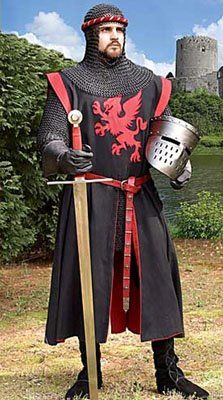 Leave a message for others who see this profile.
There are no comments yet.
Login to post a comment.
Ken Morgan
I am wondering who the William Morgan was that passed on the inheritance of Tredegar house to Miles Morgan mentioned in the biography? Was it the brother of Thomas Morgan or a different William Morgan?
posted Feb 12, 2021 by Ken Morgan
Steve Dawson
Re: Morgan-901 and Morgan-21065

In the recent Connections of the Week on 6 Jan 2021, the connections to Rev Dr Martin Luther King Jr were listed. One of his ancestors is evidently Blanche Morgan Kemys (Morgan-1338).

So, either the father listed on the page for Blanche Morgan Kemys (Morgan-1338) is incorrect, or her listing as his and Bodenham-2's daughter on the Morgan-901 page is incorrect.

Can someone please work to correct these mismatches.

posted Jan 10, 2021 by Steve Dawson
Laura DeSpain
Morgan-5856 and Morgan-901 appear to represent the same person because: They have the same siblings and locations of birth & death. These are clearly duplicates.
posted Oct 12, 2020 by Laura DeSpain

Ross Holman
Morgan-5856 and Morgan-901 do not represent the same person because: Too different
posted Feb 11, 2019 by Ross Holman

Jack Wise
Morgan-901 and Morgan-23152 appear to represent the same person because: Other than location of death everything else matches.
posted Nov 30, 2018 by Jack Wise

Jack Wise
Morgan-901 and Morgan-5856 are not ready to be merged because: While the parents & siblings appear to be the same for Morgan-901 & -5856, their birthdates are 13 years apart and their dates of death are 16 years different and the places of death are different. Further research or sources are needed to be merged.
posted on Morgan-5856 (merged) Jan 02, 2016 by Jack Wise

Jack Wise
Sheldon, what was the error and can it be corrected by editing -5856 rather than continuing the error by merging?
posted on Morgan-5856 (merged) Dec 27, 2015 by Jack Wise

Sheldon Sickler
Morgan-901 and Morgan-5856 appear to represent the same person because: I believe that I have propagated an error from the Ancestry.com when I created Morgan-5856. The best solution appears to delete him or merge him into Morgan-901.
posted on Morgan-5856 (merged) Dec 27, 2015 by Sheldon Sickler

Liz (Noland) Shifflett
John - could you check your sources for parents & date of birth? they're not both correct - Blanche & Roland had a son Thomas, but other sources show he was born 1534. A Thomas Morgan born 1520 would probably be someone else's (Roland was born in 1508 & Blanche in 1512 according to the info in their profiles, and the rest of the info works - just not son Thomas b 1520). Thanks! Liz
posted on Morgan-5856 (merged) Nov 09, 2015 by Liz (Noland) Shifflett

April (Dellinger) Dauenhauer
Morgan-1315 and Morgan-901 appear to represent the same person because: They have the same wife and the same name and going by the age of Morgan-1315's daughter's husband, they lived in the same era.
posted Aug 20, 2014 by April (Dellinger) Dauenhauer
[Living Woodhouse]
Morgan-4761 and Morgan-3137 do not represent the same person because: Thomas-4761 born 1560 has brother Thomas born 1569.