Gerald Gene Morrison was born on 9 July 1935 to Leland R Morrison and Violet M Pung in Fairport, Monroe, New York.[1] He was raised primarily by his maternal grandparents, German-Americans Joseph A Pung and Margaret (Kroeckel) Pung from the age of 4 until he reached adulthood.[2][3] He graduated from the George Jr. Republic School in Freeville, NY, a school for at-risk kids.[3]

Gerald married Celia Florence Marvel of Alfred Station on 25 August 1956 in Rochester, New York, where they had two children before moving the family to Bristol, Ontario, New York and had three more children in nearby Canandaigua.[4] He worked as an auto mechanic.[3] Gerald and Celia divorced and he ended up in Florida around 1980, where many of his paternal cousins had moved, and remarried.

ask our community of genealogists a question.
Sponsored Search by Ancestry.com
DNA Connections
It may be possible to confirm family relationships with Gerald by comparing test results with other carriers of his Y-chromosome or his mother's mitochondrial DNA. However, there are no known yDNA or mtDNA test-takers in his direct paternal or maternal line. It is likely that these autosomal DNA test-takers will share some percentage of DNA with Gerald: 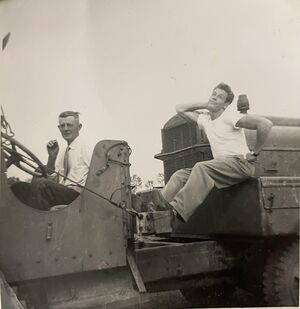