Lee Morrison is the descendant of a New Netherland settler.

Leland Ray "Lee" Morrison was born on 1 October 1908 in Plankinton, Aurora, South Dakota to Orin Lemon Morrison and Iva Reed Furman. He was a laborer in his youth who completed up to the 8th grade, and followed the Presbyterian religion. At one point while still in South Dakota, he was charged with petit larceny and convicted. He moved to Rochester, Monroe, New York - where his maternal grandparents were from - with some of his siblings at age 18 and married Elva Carolyn Jeffers on 2 April 1927 in Rochester, with whom he had three kids. They lived in Rochester, but spent a decent amount of time in Elva's hometown of Wolcott, Wayne County. They also lived temporarily in Syracuse, New York in 1929, where Leland worked as a shipper. Elva filed for and was granted divorce in Wayne County sometime in 1932 or 1933.

Leland remarried to Violet Marion Pung on 27 June 1933 in Towanda, Bradford, Pennsylvania. At this time, Leland worked as a truck driver and lived in Rochester. Together they had five children who were all born around the Rochester area. They moved from Rochester to Fairport, before moving to Walworth, Wayne County, to the farm of Mrs. Alice Swarthout in Penn Yan, Yates County. Leland was a volunteer firefighter in the village of Dresden at this time.

On 24 April 1939, three days before Violet died due to complications from childbirth, Leland was arrested by Yates County Sheriff Jay Fitzwater and Deputy Charles Kipp on a second-degree statutory charge involving a 17-year-old high school girl. While awaiting action from the grand jury as a prisoner at Yates County Jail, he suffered from a sudden attack of acute appendicitis and was rushed to the hospital in Penn Yan to undergo emergency surgery. He was indicted by the grand jury on May 16th and sentenced a couple days later to 5 years at Attica State Prison by Yates County Supreme Court Judge Nathan D. Lapham. A month later he was brought back to Penn Yan for re-sentencing due to a legal technicality that required an indefinite sentence; he was thus sentenced to 3-6 years. He was imprisoned at Attica until 25 April 1940, where his inmate number was 5650. He was subsequently transferred to Wallkill Correctional Facility due to good behavior. He was paroled on 29 April 1942, which is when he registered for the World War II draft. Lee lived in Hilton, Monroe, New York before ultimately moving back into Rochester by 1944.

Leland worked primarily as an auto mechanic and general laborer and had also gotten interested in stock car racing, leading him to partake in various races and even acting as track manager for some of them.

He was killed during a race at the Niagara County Fair Grounds in Lockport, Niagara, New York on 31 May 1948, when his car overshot the race course and overturned. He was buried in Oakwood Cemetery in Penfield, New York.

Is Lee your relative? Please don't go away!

ask our community of genealogists a question.
Sponsored Search by Ancestry.com
DNA Connections
It may be possible to confirm family relationships with Lee by comparing test results with other carriers of his Y-chromosome or his mother's mitochondrial DNA. However, there are no known yDNA or mtDNA test-takers in his direct paternal or maternal line. It is likely that these autosomal DNA test-takers will share some percentage of DNA with Lee: 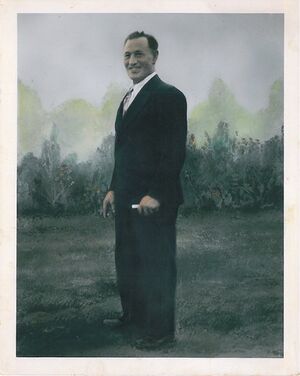