Jeanette Helen Morrison (July 6, 1927 – October 3, 2004), known professionally as Janet Leigh, was an American actress and author. She is best remembered for her performance in Psycho (1960), for which she was awarded the Golden Globe Award for Best Supporting Actress and received an Academy Award nomination.

The only child of Helen Lita (née Westergaard) and Frederick Robert Morrison, Leigh was born Jeanette Helen Morrison in Merced, California, where she also grew up. Her maternal grandparents were immigrants from Denmark,[1] and she also had Scotch-Irish and German ancestry.

Leigh married her third husband, Tony Curtis, on June 4, 1951. They had two children, Kelly and Jamie Lee, who both subsequently became actresses. Curtis had divorce papers served to Leigh on the set of The Manchurian Candidate. The couple announced their separation to the press in March 1962.

Leigh died at her home on October 3, 2004, at the age of 77 after suffering a heart attack. She was cremated after death and her ashes are interred in a niche in Westwood Village Memorial Park Cemetery in Los Angeles, California.

Thank you to Les Gilham for creating WikiTree profile Leigh-428 through the import of Les Gilham Family Tree.ged on Jun 25, 2013. Click to the Changes page for the details of edits by Les and others.

Is Janet your relative? Please don't go away!

ask our community of genealogists a question.
Sponsored Search by Ancestry.com
DNA
No known carriers of Janet's DNA have taken a DNA test. 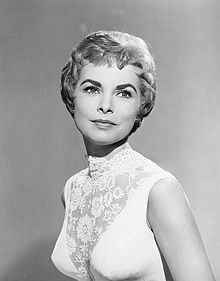 Bob Fields
Since she is Notable and no longer living, could you make her profile open, and add template please.
posted Oct 03, 2015 by Bob Fields