The following is from Wikipedia:

He was the son of geographer and clergyman Jedidiah Morse. He graduated from Yale in 1811, studied theology at Andover Seminary, and law at the Litchfield, Connecticut, school. Meanwhile he became a contributor to the Columbian Centinel of Boston, writing a series of articles that illustrated the danger to the American Union from an undue multiplication of new states in the south, and showing that it would give to a sectional minority the control of the government. These led to his being invited by Jeremiah Evarts and others to found a weekly religious newspaper, to which he gave the name Boston Recorder. He continued as sole editor and proprietor of this journal for more than a year, and in this time raised its circulation until it was exceeded by that of only two Boston papers. Morse was then associated with his elder brother, Samuel F. B. Morse, in patenting the flexible piston pump and extending its sale.

In 1823 he moved to New York, and with his brother, Richard Cary Morse, founded the New York Observer, which eventually became the oldest weekly in New York City, and the oldest religious newspaper in the state. He continued as senior editor and proprietor until 1858, when he retired to private life.

In 1839 was associated with Henry A. Munson in the development of cerography, a method of printing maps in color on the common printing press. He used this process to illustrate the geographical textbooks that he published, and in early life he assisted his father in the preparation of works of that character. The last years of his life were devoted to experimenting with an invention for the rapid exploration of the depths of the sea. This instrument, called a bathyometer, was exhibited at the World's fair in Paris in 1869, and during 1870 in New York City.[1]

Note: Sidney Morse along with his brother Richard Morse were founders of the publication called the "New York Observer". They had another famous brother Samuel Morse, Artist, Inventor and Founder also.

Note: Religious editor and inventor of the cerographic process of printing maps.

Is Sidney your ancestor? Please don't go away!

ask our community of genealogists a question.
Sponsored Search by Ancestry.com
DNA
No known carriers of Sidney's ancestors' DNA have taken a DNA test. 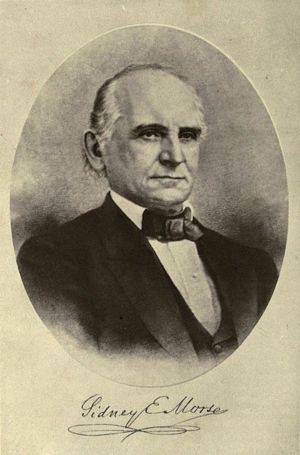