Johann Adam Moser arrived in Philadelphia, Pennsylvania on 11 September 1728 on the ship James Goodwill, recorded (on different versions of the arrivals list) as Hans Adam Moesser and Johan Adam Moser.[2]

Adam passed away in 1763 in North Carolina. It is unknown where he is buried, but there is a Find A Grave Memorial for him.[3]

Adam had a brother named Leonard. They both had sons named Jacob. There has been some confusion and mixing of records.

Two Adams were listed as immigrants, in 1728 and 1743. There is much confusion about their identities.
1753 tax list, Heidelburg Twp, Northampton Co PA.

WILL OF ADAM MOSER: IN THE NAME OF GOD AMEN I Adam Moser late of Hereford Township, in the county of Berks in the Province of Pennsylvania, now of Stinking Quarter, in the county of Orange and the Colony of North Carolina. (Yoeman) being of good bodily health, of sound mind memory & understanding, Blessed be God, having considered the uncertainty of life & the certainty of death, thought proper to settle my worldly affairs & I do hereby make my last will & testament in manner following. That is to say hereby reckoning all wills & testaments, by me heretofore made, I do declare this and no other to be my last will and testament. Principally & of all things I do recommend my soul into the hands of God & my body to the earth to be buried in a decent manner. at the discretion of my executors hereinafter named. And my mind & will is that all my just debts, funeral expenses be duly paid & satisfied & I do give & bequeath unto my sons Anthony, Francis, & Adam & to my daughters Elizabeth & Anna Phillipina the sum of five shillings lawful money of Pennsylvania aforesaid I having already advanced & given to each of them several sums of money & sundry goods & I do give & bequeath unto my son Tobias the sum of fifty pounds lawful money of Pennsylvania aforesaid & I give & bequeath unto my son Jacob the sum of sixty two pounds ten shillings lawful money of Pennsylvania aforesaid which said two several sums of money remain now in the hands of Henry Bootz & Adam Bootz & I have their two Several Bonds for the sums bearing date respectively the twenty first day of February 1761. And as for and concerning all the rest of my estate both & personally whatsoever & wheresoever I do give & devise the same unto my sons Tobias & Jacob, their heirs & assigns forever to be equally divided between them part and share alike & of this my last will & testament I do hereby appoint my said sons Tobias & Jacob executors. In witness whereof the said Adam Moser set my hand & seal hereunto the fourth day of August in the year of our Lord one thousand seven hundred sixty three.

A common source for early Moser research has been a research paper by the late Gary Mosier entitled Moser of Middle Franken and Pennsylvania, 1653-1732. Gary wrote that paper after hiring a German professional genealogist to do local research, but with further research Gary found that the paper was full of errors. Gary's family has asked that the paper not be cited, saying that Gary did not want the document cited or further shared. However, researchers are free to use Gary's references or links to primary sources.

Is Adam your ancestor? Please don't go away!

ask our community of genealogists a question.
Sponsored Search by Ancestry.com
DNA Connections
It may be possible to confirm family relationships with Adam by comparing test results with other carriers of his Y-chromosome or his mother's mitochondrial DNA. However, there are no known yDNA or mtDNA test-takers in his direct paternal or maternal line. It is likely that these autosomal DNA test-takers will share some percentage of DNA with Adam: 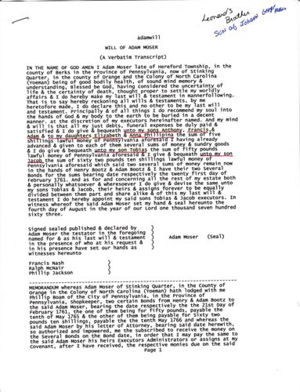 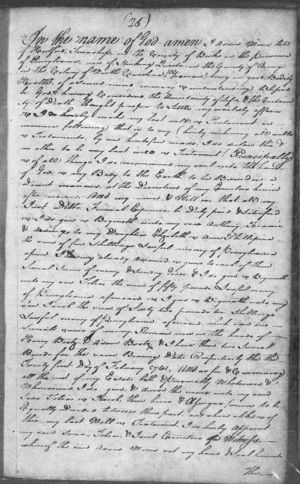 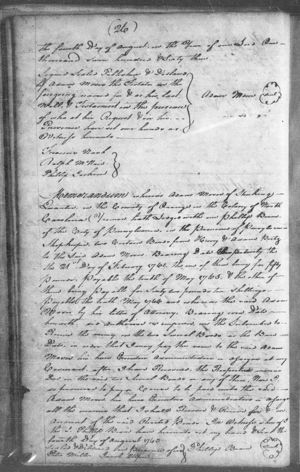 Stephen Mosier
A common source, used here, for the birth of Johann Adam Moser, son of Adam Moser and Elizabetha Wollinger, has been Gary Mosier’s “Moser of Middle Franken and Pennsylvania, 1653-1732.” Gary’s widow Mary has asked that that reference not be used, saying: “Very unfortunately, as Gary did more research himself began to find that that paper was full of errors. I absolutely know that Gary did not want that document cited or further shared. I would ask you to please not cite or share 'Moser of Middle Franken and Pennsylvania'.”

I have therefore replaced that citation with the source that is given in Gary’s paper for the birth of Johann Adam. Mary said that we were free to use Gary’s original sources.

Rebecca (Tucker) Morris
Thank you for making the changes. I wonder if this information should be added to the bio under Research Notes and hope that people take the time to read it and also not add 'Moser of Middle Franken and Pennsylvania' in the profile again.
posted Jul 10, 2021 by Rebecca (Tucker) Morris

Stephen Mosier
If aka were the only means of including name variations on a search, then I would heartily agree with it. However, to test the system, I entered a search for "* Moser". I got nearly 300 pages of answers yielding the following names, among many others: moser, moses, messier, moss, moger, mosyer, mower, mosher, messer, moore, moes, morse, meiser, mossman, rose, mouser, mazur, AND MOSIER. To further test the system, I entered a new fictitious child for a Mosier ancestor, and got possible matches for Mosher and Messier. So again, the system needed no prompting to search for spelling variations. So I continue to believe that we're unnecessarily using the term aka.
posted Jun 28, 2021 by Stephen Mosier

Unfortunately, WikiTree name search does not recognize many other names found in the Palatine population, and most definitely does not identify the commonly seen variants of those names. It is because of all those other names that some of us have become obsessive about adding variants to the name fields.

Also, sometimes we encounter members who have been given a particular spelling in their family tree and do not recognize that the name spelling on a WikiTree profile is actually the same person, unless their family's spelling has been logged in the data fields for the profile. For example, if the modern family spells the name Moeser, family members may not recognize that their ancestors might have been recorded as Moser unless the profile tells them that Moeser is a variant of the same name.

Stephen Mosier
I see your point, and I can agree with that.
posted Jun 29, 2021 by Stephen Mosier
James Poirier
Hi All - And I am having the same name problem with my female Saulpaugh ancestor. Apparently, Saulpaugh came from Salbach/Saalbach, Palatine immigrants. In fact, my known ancestor, Hannah born c. 1787/88, who married Robert Conklin, was listed only on the baptismal records in Linlithgo as "Salpach." Somewhere on Ancestry she acquired "Saulpaugh" but I don't know if she was ever known by that name before her marriage. Perhaps this "Salpach" was an intermediate step between the Anglicization of "Salbach" (from whom I believe she stemmed, mainly due to physical proximity to male Saulpaughs on a few censuses, but uncertain) to Saulpaugh. My Conklin ancestors became "Conkling" during my great-grandfather's generation; perhaps this was due to a desire to try to give the family name more cachet and a higher standing in society; snob appeal, if you will.

posted Jun 28, 2021 by James Poirier
Janet (Ramage) Binkley
This is an interesting dilemma. There is no place in wikiTree to enter alternate name spellings that have been found in original documents and therefore are useful in a search. I assume many of us have used the AKA lines to enter such items, even when the spelling wasn't used by the individual.
posted Jun 26, 2021 by Janet (Ramage) Binkley

Dave Rutherford
Yes, the problem is with the phrase "aka". The purpose of adding these names is so that the profile will show in searches if, for instance, someone tried to import a tree from somewhere else using this spelling. It is designed to prevent duplication.
posted Jun 27, 2021 by Dave Rutherford

Ellen Smith
As I see it, "also known as" can include names by which a person has been known to posterity, not just names they were known by during their lifetime.
posted Jun 27, 2021 by Ellen Smith

Rebecca (Tucker) Morris
I agree and have several family names that were spelled differently with each generation. Even Moser descendants changed to Mosier around 1900.
posted Jun 27, 2021 by Rebecca (Tucker) Morris
Katherine (Cline) Cline-Bowman
Many of us have suffered through that for a wide variety of reasons. At one point I had a set of uncles that each spelled the last name a different way. Then, some names change completely, e.g. Doerfflinger to Taffinger, or Hussong to Hesson. I'm shocked people have made some of these connections. Maybe aka should be changed to other surname variations, or maybe alternative kin alteration/adaptation.
posted Jun 27, 2021 by Katherine (Cline) Cline-Bowman

Andrea Zuercher
Interesting discussion. I have found with some family names (Shenk/Shank for one) that it isn't even across generations that spellings change. Several sibling ancestors have records with their names spelled differently from those of their other siblings. It's quite a challenge at times!
posted Jun 28, 2021 by Andrea Zuercher

Stephen Mosier
I think it is incorrect to use an “aka Mosier” for Johann Adam Moser. aka means “also known as.” Johann was never “known as” a Mosier or by any other name than Moser. The Moser name has been misspelled a dozen different ways, especially in census records, and has been officially changed to many other variants (Mosier, Mozier, Mosher, etc). But I think we need to keep track of those changes and not assign them too early. In Johann Adam’s case, he is recorded as Moser on the ship “Goodwill”; his father was Moser; his sons Adam and Jacob continued to use the name Moser. Son Tobias did change his name to Mosier (often done to disguise German heritage), and sons Anthony and Francis might have done so – records show them under both names. But Johann Adam did not change his name, and we should not say that he was known by any other name than Moser. (I’m the 5th gr-grandson of Johann Adam. My grandfather and his brothers changed the name to Mosier in 1900 -- I think it’s important to know and date those changes correctly).
posted Jun 26, 2021 by Stephen Mosier

Dave Rutherford
I changed Johann Adam's mother from Elizabeth Wollinger, who was his stepmother to Maria Ströbel who was still alive and married to his father when he was born.
posted Jun 24, 2020 by Dave Rutherford

Sara Rice
Mosier-567 and Moser-92 appear to represent the same person because: They have the same relationships
posted Jul 30, 2019 by Sara Rice