[send private message]
Profile last modified 18 Dec 2021 | Created 8 Jul 2011
This page has been accessed 10,594 times.
The Birth, Death, and Marriage Dates are a rough estimate. See the text for details.

Joan de Mowbray is in a trail badged by the Magna Carta Project to surety baron William de Mowbray (see text below).

This profile is part of the Gray Name Study.

Joan de Mowbray was the daughter of John de Mowbray, Knt., 4th Lord Mowbray, and Elizabeth de Segrave.[1][2] Her date and place of birth are unknown and are estimated.

Joan married first, before 1384, to Thomas Gray (or Grey), Knt., son and heir of Thomas Gray, Knt., and Margaret de Presfen (or Pressen).[1] Thomas Grey was Constable of Norham Castle; Earl Marshal 1389-1392; Steward, Sheriff, Escheator and Chief Justice of the episcopal liberty of Norhamshire and Islandshire 1395-1400; and Knight of the Shire for Northumberland in 1397 and 1399.[1] They had four sons and one daughter:

Joan's date and place of death are unknown and Thomas Tunstall died 5 November 1415.[1]

Click the Changes tab to see edits to this profile. Thank you to everyone who contributed.

This profile was reviewed and approved for the project 1 Apr 2020 by Thiessen-117.

Joan (Mowbray) Tunstall is a descendant of Magna Carta Surety Baron William de Mowbray and is in trails badged by the Magna Carta Project to the following Gateway Ancestors:

Joan (Mowbray) Tunstall also appears in trails that have not yet been badged (needing work) to the following Gateways: 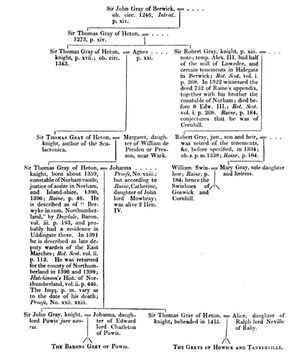 If you'would be interested in getting involved or following our progress, you can do so at the Magna Carta Base Camp. You may also follow out progress through this link:

posted Mar 09, 2018 by David Douglass
[Living Ogle]
She might have died in Lancashire... around Thurland castle ... home of her second hubbie.
posted Mar 02, 2018 by [Living Ogle]
William Collins
On the death of Sir Thomas Gray, she married before 8 Jun 1407 (as his 2nd wife) Thomas Tunstall, Knt. They had no known issue.
posted Aug 08, 2017 by William Collins
G Gaffin
Did she die in Wark-on-Tweed or Wark-on-Tyne? They are both in Northumberland.
posted Sep 30, 2014 by G Gaffin