William seems to have been of short stature. He is described in the Histoire des Ducs de Normandie et des Rois d'Angleterre as being "autresi petis comme uns nains; mais moult esprit larges et vaillans" - "as small as a dwarf; but of very generous character, and valiant."[6]

It is possible that there was also at least one daughter, Maud (Mowbray) Hansard, but the evidence for this is far from firm.[9]

William's Mowbray inheritance in England included the Barony of Thirsk, based in Yorkshire.[10] He also inherited the seigneurship of Montbrai, Normandy.[1][2][5]

In 1193 William was a witness to a charter of Richard I who was then captive in Germany.[1][2][5] This suggests that either William took part in Richard I's crusading activities, or went to Germany to be in his retinue.

The next year William paid £100 to enter into his inheritance.[1][2][3][5] He also contributed a substantial sum towards Richard I's ransom, for which he was a hostage:[3] the Red Book of the Exchequer records his contribution as some £88.[4] In 1197 he witnessed a treaty between Richard and Baldwin of Flanders.[1][2][3][5]

In 1199, following the death of Richard I, William strengthened the fortifications of his castles. His loyalty to the new king was a for short time doubtful until he received assurances that his rights would be respected.[1][2][3][5]

During the years that followed, William was generally spared from scutage demands, suggesting that he gave military service.[3] He was overseas, probably in Normandy, in King John's service in 1201 and 1203.[5]

In 1201 a compromise was reached in a long-lasting land dispute with William de Stuteville, who was persuaded to accept the manor of Brinklow, Warwickshire and 9 knights' fees in settlement.[3][5]

Following King John's loss of Normandy, William's Norman lands passed permanently out of his possession and were taken over by the French king.[1][2][5]

In 1210 William took part in King John's campaign in Ireland.[5]

Magna Carta and Battle of Lincoln

William joined in the baronial confederacy against King John in 1215, and was one of the Surety Barons for the Magna Carta.[1][2][3][5] He used the opportunities the political situation provided to secure the Constableship of York Castle in June 1215.[3][5] Along with other rebel barons, he was excommunicated late in 1215, and his lands became forfeit.[3][5]

William continued in rebellion, and was captured at the Battle of Lincoln in 1217. Later that year he returned to allegiance and his lands were restored, subject to the surrender, as part of the agreement, of Banstead, Surrey, which was brought into Mowbray possession through his mother.[1][2][3]

William founded a chantry chapel at Thirsk, Yorkshire.[3] He confirmed various gifts by his father and paternal grandfather to Newburgh Priory, Yorkshire,[4] of which he was a benefactor himself,[3] and other gifts to Byland Abbey, Yorkshire and Furness Abbey, Lancashire.[1][2]

In 1221 William was summoned to help capture Skipsea Castle, Yorkshire, held by William de Forz, another of the Magna Carta surety barons who had risen in rebellion again,[3] and took part in the siege of Bytham Castle, Lincolnshire.[1][2][5]

"William de Mowbray (c. 1173-c. 1224), a landowner with Yorkshire estates centring on Thirsk and Lincolnshire lands in the Isle of Axholme, was son of Nigel de Mowbray and his wife Mabel, probably the daughter of William de Patri. In the Histoire des Ducs de Normandie he is described as being as small as a dwarf, but very generous and valiant.

"There was much in William’s background and personal circumstances that can be seen, with hindsight, as pointing the way to his involvement in the rebellion against King John. His forebear, Roger de Mowbray, had taken part in the great uprising against Henry II in 1173-4, which had convulsed the whole Angevin world. He himself had become entangled in financial dealings with King John which were to cost him dearly. His problems lay in his family’s early rise to power, specifically in their acquisition from Henry I a century before of the lands of Robert de Stuteville, a supporter of Henry’s brother Robert Curthose in his failed bid for the English crown, and who had forfeited his property to Henry. In 1200 Robert’s descendant, William, reactivated his family’s claim against the Mowbrays, and in that year William offered the sum of 2000 marks (over £1300) to John to secure a judgement in the matter. When the case was brought before the king’s justices, however, it ended in a compromise, and one highly favourable to Stuteville. William was nonetheless still under obligation to pay and, like others before him, had little alternative but to borrow from the Jews. William had gambled everything on the favourable outcome of a risky legal action and had failed. It is clear that, when he embarked on rebellion against John, he had nothing to lose.

"Mowbray was taken prisoner at the battle of Lincoln in May 1217, and had to surrender the manor of Banstead in Surrey, which had formed his mother’s marriage portion, to Hubert de Burgh as the price of redemption. His family never succeeded in recovering the estate.

"Mowbray founded the chapel of St Nicholas at Thirsk, and was a benefactor of his father’s foundation, Newburgh priory, where, on his death at Axholme around 1224, he was buried.

"Mowbray was typical those lords, particularly in northern England, who had suffered at the hands of John, felt a burning sense of grievance, and were longing for the opportunity to get their own back."

Caution: William de Mowbray-135 has a different father and son and appears to be a member of a different family. Do not attempt a merge without further research.

The parentage of William's wife Avice is not known with any certainty. Contemporary sources just name her as Avice. Her identification as a daughter of William d'Aubigny seems to originate in Dugdale's recension of Progenies Moubraiorum.[3]

In the past, WikiTree profiles for two other children have been linked, but have not been verified as daughters by credible source and it is possible that they never existed:

This profile was reviewed for the Magna Carta Project by Michael Cayley in February 2020. 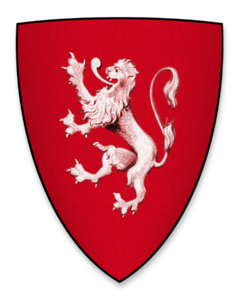 Michael Cayley
I pan to do some work on this profile as part of my work for the Magna Carta Project on Surety Barons. Please contact me if you have any questions. Thanks!
posted Feb 24, 2020 by Michael Cayley

Michael Cayley
I have now finished the main work I intend on this profile. If anyone spots any typos etc, please either correct them or message me. Thanks!
posted Mar 11, 2020 by Michael Cayley
William Collins
https://www.britannica.com/topic/baron gives a good explanation of the differences between a baron and a Baron.
posted Aug 14, 2019 by William Collins

Michael Cayley
Nor is there support for the title in the Victoria County History pages on Thirsk.
posted Aug 14, 2019 by Michael Cayley

Michael Cayley
Should be deleted. Not supported in Richardson, the Complete Peerage, the original DNB or the ODNB. He was a baron, and he held Thirsk, but that does not give him a title "Baron of Thirsk". His Wikipedia article calls him "6th Baron of Thirsk", which I imagine is where this has come from, and which has been quite widely picked up in trees on the web, but I am not aware of any good source which backs that up as a formal designation.
posted Aug 14, 2019 by Michael Cayley

This is another interesting WEB Site about York Castle.

Liz (Noland) Shifflett
Hi! The Magna Carta project is working toward having a project member as "Surety Specialist" for each surety baron, to aid collaboration and to help watch over the profile. (See details about the role of Surety Specialists here, the "long answer" on the project's Glossary page.)