Wolfgang Amadeus Mozart was a musician, and an enduringly world-famous composer of the Classical period.

Wolfgang Amadeus Mozart was born on 27 January 1756 in Salzburg, and baptized as Johannes Chrysostomus Wolfgangus Theophilus Mozart. His parents were Leopold Mozart and Anna Maria Pertl. His father was an experienced composer, although relatively unknown, and a skilled teacher of music. He also wrote and published a textbook about the violin, which was successful.

He was the youngest of seven children, although five of his siblings had perished in infancy. He and his older sister learned much from their father and not just in the area of music. Leopold taught them the piano, the violin, several languages, and academics. When Wolfgang showed true talent for composing, Leopold abandoned his own composing efforts to focus on helping his son succeed.

Wolfgang and his sister Nannerl often traveled across Europe to perform as child prodigies, and they were fortunate to meet many court royals as well as other musicians and composers in their journeys. One such encounter was with Johann Christian Bach, whom he met in London in 1764 and 1765. Wolfgang composed his first symphony at the young age of eight years old, most likely with the assistance of his father.

By 1769, his travels began to last longer and cover greater distances. On one such concert tour, he went on a lengthy tour of Italy and met with Josef Mysliveček and Giovanni Battista Martini in Bologna. It was at this time that he was accepted as a member of the famous Accademia Filarmonica.

By 1770, his skills were being honed by his hard work, increasing quality of training and education, and his ability to continue to turn out new compositions. By 1771 he had written all 13 of what were regarded as his "childhood symphonies" and possibly several others that have not been positively identified. He had also developed 4 Piano Concertos, a lost Concerto for Trumpet, at least one completed Sonata for Piano Four-Hands (and possibly others), numerous childhood Violin Sonatas, at least one String Quartet composition, a few Serenades, a Quodlibet, a Divertimenti, at least one March, several Dances, several Masses, a Kyrie, an Offertory, some Antiphons and Motets, and a few Operas. Several of these were performed widely and a few of these became quite successful.

Salzburg and His Mother's Passing

By 1773, he received employment by the ruler of Salzburg as a court musician, but he felt stifled in this role, and by 1777, he resigned the position to return to more actively pursuing composing work. Even while he was occupied in Salzburg, he managed to continue to compose new works and completed a number of Piano concertos, at least one of which was considered a breakthrough in his career.

Wolfgang struggled to find a position that suited him and began to encounter financial hardships. Around this same period, he began a relationship with soprano Aloysia Weber, but he was unable to gain employment near to her. His mother became ill and after a period of declining health eventually died on 3 July 1778. There was some delays in contacting a doctor, which was attributed to his lack of funds. He ended up living in the mansion of the Duke d'Orléans as a personal friend of the Duke's personal secretary.

His father continued to seek employment for his son, primarily around Salzburg. By the time Wolfgang had recovered from his mother's passing and his financial woes, he tried to resume his relationship with Aloysia and found she had already moved on. He reluctantly returned to Salzburg in 1779 as a court organist and concertmaster.

By 1881, he was seeing success in his most recent opera, Idomeneo. This opened the door for an audience with the Emperor, which allowed him greater opportunities than he could experience in Salzburg. Unfortunately, the Archbishop Colleredo, his current employer, opposed his leaving and refused his resignation. Ultimately, the Archbishop fired him from the position and worse, his father made it clear that he was very disappointed in his son's decision.

Mozart went on to Vienna to explore a career as a freelance pianist, and soon became known as the finest keyboard player in Vienna. He continued his prolific work at composing, turning out many new works, some of which were highly accepted as successes. All was not wine and roses for him, either in his career or in relationships. His fight with Colleredo continued, which put a black eye on all prospective performances. He also expressed an interest in Aloysia's sister, Constanze. Their courtship was rocky and her father was very reluctant to give her hand in marriage. The couple married on 4 August 1782, and the following day her father's consent arrived in the mail.

Over the next decade, the happy couple had six children, but like his own parents, only two of them survived infancy. His two surviving children, both sons, were named Karl Thomas Mozart (born 1784) and Franz Xaver Wolfgang Mozart (born 1791). He also took time during this period to become intimately familiar with the works of Johann Sebastian Bach and George Frideric Handel, and this would influence his compositions from that point forward. He also befriended Joseph Haydn and the two would often play together when they met. His fervor for developing new material continued to burn hot, turning out sometimes three or four new concertos every season. But Mozart continued to spend money as he made it, purchasing expensive pianos and sending his son Karl to the finest boarding school, which made it challenging for the family make ends meet.

In 1784, Mozart joined the Freemasons, which affected the direction of his life from that date on. As the late 1780's approached, Mozart began to feel true financial issues, as the Austrio-Turkish war impacted his ability to find paying performances and the aristocracy no longer could afford such extravagances. Mozart's family moved to a less expensive suburban area and he began borrowing money just to survive. He began to turn out less and less new work, and his performances were almost nonexistent.

As his struggles continued, he traveled frequently, hoping to find employment elsewhere. He saw some success in 1790 that showed promise in pulling him out of his potential financial ruin. But it was in 1791 that he was struck by illness. On 6 September, he fell ill during a performance in Prague, and his health continued a steady decline. By 20 November, he became bedridden, experiencing swelling, pain, and vomiting. His wife, her younger sister, and his doctor attended to him as he kept getting worse until he finally passed away on 5 December 1791 at the young age of 35.

He was buried in a "common grave" in Vienna at the St. Marx Cemetery outside the city on 7 December. It was rumored that no mourners showed up for the burial, however, this was fairly common for this time period and for the culture of the Austrians. With his passing, his music gained a whole new popularity, and perhaps in celebration of his life, was played throughout the region by many.

Sponsored Search by Ancestry.com
DNA
No known carriers of Wolfgang's DNA have taken a DNA test. 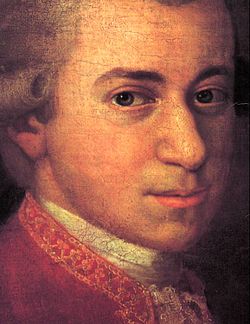 Dirk Laurie
Is it policy in the Notables product that the first names at birth are not used? In this case these are usually reported as Johannes Chrysostomus Wolfgangus Theophilus.
posted Jan 28, 2018 by Dirk Laurie