Karol Muchowicz, reported his birth date of 14 April 1888 and place of birth Krakau, Austria on his Declaration of Intention to become a US citizen. His parents were Karol Muchowicz and Ludvika Bornholtz. Karol passed away in Freeport, Brazoria County, Texas on 18 February 1955.[1][2][3]

Revolution
Karol emigrated from Warsaw during Revolution in the Kingdom of Poland 1905-1907 - a time of mass political and social unrest. Karol was known to be affiliated with a patriotic Polish organization that conspired against the Tsar's regime. Karol ran homing pigeons that carried messages for the patriots and was exposed by one of his colleagues. Karol learns that he must leave Warsaw at once to protect his family so he plans his escape.[4]

The Czar Police
Karol's brother Romuald Muchowicz and his father Karol Muchowicz disguised young Karol as an old woman in order bypass the Czar's police force. He narrowly escapes as he boards a Bremen, Germany bound train. The family in Warsaw believed Karol was headed to Argentina. The Czar police came to his parents home and on finding that Karol was gone, arrested his brother Romauld. He was nearly beaten to death but was eventually set free. [4]

Professor Woerman II
Once in Bremen, Germany Karol bought passage aboard the steamship "Professor Woerman II" which was headed to Galveston, Texas. The steam ship, loaded with about 1,000 immigrants, set off for the small Texas island. Young Karol, carrying only $12 in his pocket and no understanding of the English language, steps onto Texas soil and, totally alone, embarks on his new life in America. His family in Warsaw never heard from him again. [5]

A Pole in Texas
Karol makes his way east from Galveston to Port Arthur, Texas where he finds employment at the Texas Company Refinery (became Texaco). Soon he hears about another European immigrant who was living nearby. Karol Muchowicz set out to meet this young woman whose name was Anna Petrow. They began to court, and on the third meeting, Karol presented a marriage license. They were married five days later.[6]

Children Born to Karol and Anna

"She was talking to us about her son Karol - all the time she was waiting for even a very small message from him, even passed by someone. After having sent Karol abroad my dad, Romuald, was arrested. Romuald returned from prison having his back dark violet, so much was he beaten by his torturers instead of his brother Karol. My mom and granny were doing their best to save his life. But despite their efforts my weak dad caught tuberculosis."

"First, he had a dairy between Port Arthur and Beaumont. He sold it in 1924 and went to Port Arthur, which then had a district with badly run-down houses. He bought a half block in this area in 1925, burned down the buildings on that property, and built a garage apartment, using the downstairs portion to store produce. He would go to Louisiana and buy sweet potatoes and citrus fruit by the bobtail truck load and sell it." As the business prospered, he used the large space available to him to store other items, branching into the purchase of wook, which was cut by others, brought in with a horse and wagon and sold by the cord. In 1928, Carl constructed a Gulf Service station on the corner of his property. He also began buying and selling scrap - iron, brass, copper, batteries, and tires. "He sold old tires to the Japanese. He paid 10 to 15 cents a pound for copper and it went up as high as 80 cents a pound. In 1929, when the stock market crashed, the demand for scrap plunged along with it. The scrap metal and tires Carl had on hand were suddenly worth less than they had cost him. At the early signs of the Depression, Carl, was first at the bank and managed to draw out $750. He sold out of the junk business, including not only his scrap, but also the nine trucks he had put on the highway while he was buying junk. Carl had sometimes accompanied one of the truck drivers in his travels connected with the junk business and had met the driver's brother, with whom they sometimes stayed in Palacios. The friend suggested Carl buy a load of shrimp at the docks and take it back to sell in the Port Arthur area. Carl bought fine jumbo shrimp, which he sold at about 5 cents a pound, leading the Muchowich family into its era in the shrimping business.

ask our community of genealogists a question.
Sponsored Search by Ancestry.com
DNA Connections
It may be possible to confirm family relationships with Carl by comparing test results with other carriers of his Y-chromosome or his mother's mitochondrial DNA. However, there are no known yDNA or mtDNA test-takers in his direct paternal or maternal line. It is likely that these autosomal DNA test-takers will share some percentage of DNA with Carl: 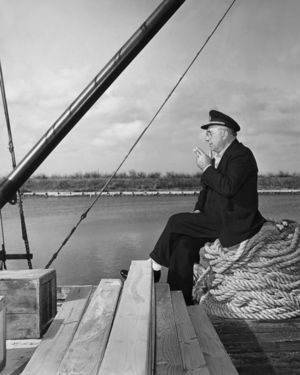 Declaration of Intention for Citizenship 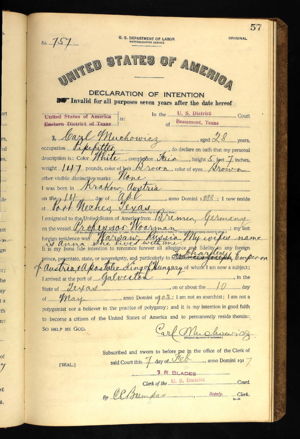 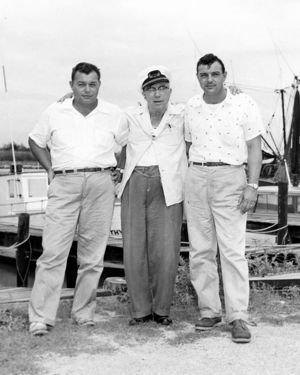 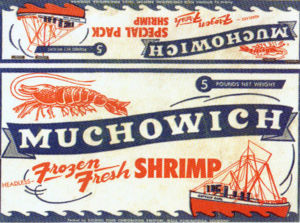 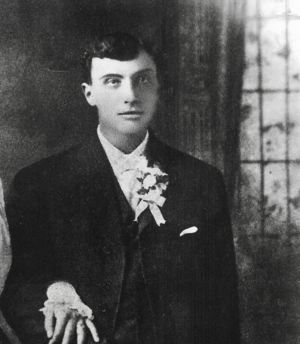