Larry Muise is a descendant of an Acadian

Larry was born in Wakefield in 1926, moving to Nova Scotia with his family at about five years old. His Godparents were his Uncle René and Aunt, Victoire. He attended school in Sainte Anne du Ruisseau, then returned to Massachusetts at age 17. He followed his older brother Edward there, living for a time with his great-aunt in Melrose when he first moved to the States. Downstairs was an Irishman who ran the trolleys and would let him ride for free.

Larry was a contractor on the North Shore of Boston. He married in Isabelle MacDonald, had two sons there, and built a house in Wakefield.

He moved back to Nova Scotia after a divorce and married Treva Beck. They raised two sons there, moving to Goffstown, NH in 1987. They moved to Manchester in 1992 and retired in Sainte Anne du Ruisseau in 1997.

MUISE, LAWRENCE "LARRY" ARTHUR - 1926 - 2011 - Larry Muise, 85, of Eel Brook, Nova Scotia, died on Friday, August 19th, 2011, due to a motor vehicle accident in Beaverbrook, Albert County, New Brunswick. Larry was born Lawrence Arthur Muise in Wakefield, Massachusetts, USA, on March 10th, 1926, to the late Louis and Helene (LeBlanc) Muise. He was part of that migrating Acadian heritage moving from home in Nova Scotia down the Airline Road to Massachusetts and back many times in life. He was one of the many who lived with one foot in the English-speaking modernity of Massachusetts and the other foot in the French-speaking heritage of Acadian Nova Scotia. Like his brothers, Larry was a carpenter by trade until retirement. His love of wood, though, went beyond the work of his hands and included the forests near his family's homestead in Nova Scotia. The tales of those woods span the generations from the time he spent there with his father to taking his own sons in on the back of a tractor deep in the heart of winter. Wood and forests were not his only passion, however; after retirement, Larry spent his time working as a volunteer driver for people unable to get to doctor's appointments and other important events and also worked in an art gallery. This volunteer spirit coupled with his devout Catholic beliefs led Larry to join the Knights of Columbus in which he served as a 4th degree. Larry was a member of the St. Ambrose Roman Catholic Church in Yarmouth, NS. He also attended the Holy Ghost Catholic Church in Riverside-Albert, NB, whenever he and his wife Treva visited her family, The Becks, in the area. His love of people was not only shared in his volunteer actions but also in his everyday life. He loved to dance (especially square dancing with Treva); he loved baseball (Major League or Little League); and he loved the Boston Bruins! Larry will be remembered by many for his wonderful sense of humor, his teasing and his tricks, which he mischievously passed down to his sons and grandsons. He was very proud of the accomplishments of all four of his boys. After migrating back to Nova Scotia one last time in the mid- 1990's, Larry and Treva traveled often visiting the boys and their families because they wished to share in the lives of the ones they loved so dearly. Larry will be deeply missed by his beloved wife, Treva (Beck) Muise; sons, David of Weare, New Hampshire, Gordon and wife Ginny of Virginia, Marcel and wife Jessica of Blue Hill, Maine, Chris and wife Amy of Blue Hill, Maine. He will also be missed by his grandchildren: Cherie, Heather, Danielle, Alissa, River, Benjamin, Liliana and Genevieve; his great-grandchild: Christina; and sister: Helen Muise of Eel Brook, NS; as well as many nieces and nephews in the States and Canada. Besides his parents he was predeceased by brothers, Bernard, James, Edward, Clifford and Martin.

Larry's body will be resting at the Albert County Funeral Home with visitation on Monday from 11:00am until 1:00pm with Parish Prayers and a time of sharing and telling stories at 12:30pm. The Funeral Mass will be held at the Holy Ghost Catholic Church in Riverside-Albert on Tuesday, August 30th, 2011 at 11:00am with Father Phil Mulligan officiating. Interment in the Holy Ghost Cemetery, Hopewell Hill, NB. The family will be meeting with relatives and friends at the Broadleaf Guest Ranch to continue celebrating Larry's life following the service. In lieu of flowers, the family welcomes you to donate to the Knights of Columbus or the Holy Ghost Cemetery in Larry's memory. Arrangements in the care of the Albert County Funeral Home, 4130 Route 114, Hopewell Cape, NB, E4H-3K2; (506) 734-2780; www.albertcountyfh.com."

Is Larry your relative? Please don't go away!

ask our community of genealogists a question.
Sponsored Search by Ancestry.com
DNA Connections
It may be possible to confirm family relationships by comparing test results with Larry or other carriers of his Y-chromosome or his mother's mitochondrial DNA. Y-chromosome DNA test-takers in his direct paternal line on WikiTree: Mitochondrial DNA test-takers in the direct maternal line: 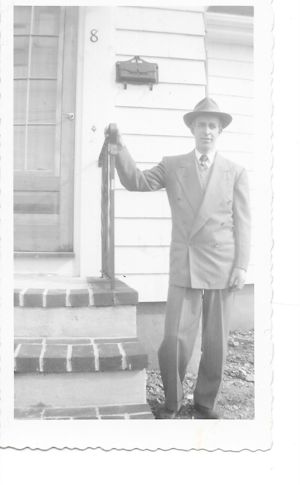 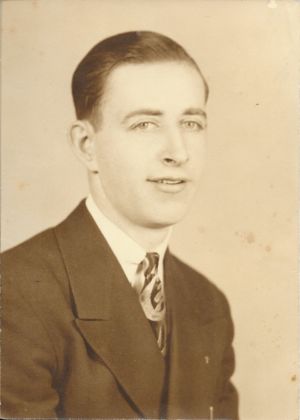 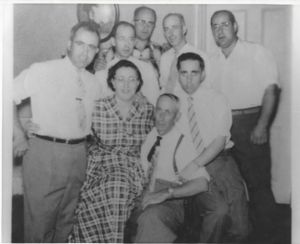 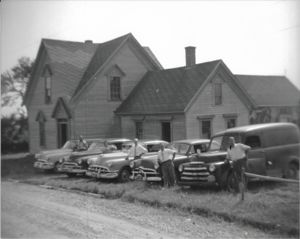