His birth name does not seem to be known but his father was Sri Girish Chandra Mukhopadhyay who was a Police Inspector, and of a distinguished Brahmin family, and had to live in Calcutta some of the time, though the rest of the family stayed at home. He was born in the village of Satgachia about 80kms north of Calcutta in West Bengal[1]. Swami Pranabananda was thought to have been aged 70 to 75 years when he died in October 1919, giving a birth year in the range 1844 to 1849. This estimate is given by Jnanendranath Mukhopadyaya who knew Swami Pranabananda very well.

Even as a child he had a very amiable disposition and got on well with everyone. His spiritual side, his ‘beingness’, was awakened by his grand uncle, a devout Brahmin, his guardian, in the absence of his father[1].

His mother died when he was aged about 20 [1867?] leaving a baby sister, whom he became very fond of, but had a carefree life spending money on the needy and with his closest friends, until when aged about 22 [1869?] he was banished from the home by his father, who had been deeply affected by the loss of his wife, and told him to go and earn a living[1].

He managed to get employment with the Tirhoot (Tirhut) State Railway, and so impressed his English employer it led to appointment as Station Master at Samastipur, in Bihar State, which helped to feed his drug habit and give money to renunciates and the poor. He left his employment suddenly, without giving any reason, and headed for Nepal in the Himalayas, where he is said to have been encouraged to stay by the King, Jang Bahadur (1817 - 1877)[2], the Maharaja of Nepal. After fixing their newly installed telegraph system, which he had learnt about at his first job with the railways, he returned to the plains to Benares.

There he began his Sadhana with his Guru Lahiri Mahasaya (1825-1895), who after a while advised him to go back to Samastipur, where he was offered and took up the position of Station Master again, aged about 32 [1879?].

"According to the wish of Sri Lahiri Mahasaya"[1], he wrote to his father telling him he was coming home, and learnt that the little infant sister he had loved so much was getting married, so he went home in time for the marriage, arriving in the garb of a renunciant monk, which greatly impressed the village people. This was also about ten years after he had left home.

Whilst at home, and being his only son, his father wanted him to get married, which he dutifully agreed to, to a woman chosen by his father. He helped his village people to get employment with the railway and visited his Guru in Benares when he could. But his greatest desire was to be with his Guru and this Lahiri Mahasaya told him would happen: he was offered the position of Stationmaster with E.I. Rail near Benares. At this time his father passed away so he took his family to join him near his work place, where his wife gave birth to a son and daughter.

His greatest need was to get rid of his drug habit, and this too came about but nearly resulted in his death from withdrawal effects. His understanding and kindly E.I. Manager put him on sick-leave and paid all his medical costs resulting in him being back at work after a month.

Somewhere and sometime along the way, during his employment with the railways, he became acquainted with Paramahansa Yogananda’s father Bhagabati Charan Ghosh who was also employed by the State Railways organization. Perhaps he was that kindly E.I. Manager? This was the start of an association, which would lead to Paramahansa Yogananda meeting Swami Pranabananda in 1905, and having a firsthand example of the siddhi power of bilocation (Yogananda, 1946, Ch.3.’The Saint with two bodies’).

Due to problems with his father-in-law, to whom his wife was of course strongly attached, his desire to renounce the householder worldly life and become a sannyasi grew stronger but his Guru would not allow it at the time. After a while he asked Adishwara Srimat Swami Atmananda Giri Maharaj to initiate him, which he agreed to, thus becoming his Sannyas-Guru.

On returning home he found that his wife had taken the children and gone back to her father. When asked to return to his home she refused, so he left them there never to see them again, as he embarked on his chosen life as a sannyasi. According to Swami Pranabananda, it was his own Guru, [Yoga-Guru] Lahiri Mahasaya, who “interceded … with Brahma” when the Swami pleaded to “God my Master” through his Guru to lift the veil between him and the Infinite. It was also Lahiri Mahasaya who suggested that he “apply for a pension from your company” (Yogananda, 1946, p.30-2).

He did not like to beg for food and sought to be invalided out of his job with the railways and receive a disability pension. Swamiji was also to tell Paramahansa Yogananda, in about 1905, that “I know the divine will of Lahiri Mahasaya worked through the doctor and the railroad officials, including your father” (Yogananda, 1946, p.31).

The Priest-Minister of Maharana Fateh Singh Bahadur (1849-1930) and some other initiates of Swamiji, had invited him to Udaipur in Rajasthan and gave him residence in the Maharana’s palace, where he would be visited by the Maharana on several occasions, wanting him to stay there. In all he spent about 4 years there.

In 1300 B.S., about 1894 A.D., Swamiji, the new sannyasi disciple, met Babadji in the presence of Swamiji’s Yoga-Guru Lahiri Mahasaya, who was a disciple of his Guru Babadji. They conversed together on many topics. A few days later Atmanandaji took Swamiji to the Kumbhamela festival at Prayag, where he met Bishnupada Mukhopadhyaya, Headmaster of the English Municipal School, who became his disciple.

After he left Udaipur for Benares for the last time, having promised to help the Maharana should he ever need it, he was informed that the latter’s only son, Bhupal Singh (1884-1955) had suffered paralysis of his legs, at the age of 5[3]. This would have been about 1889, and no medical cure had been found for him. Swamiji was living in a house named "Pranabashram" provided by the Maharana near the Ganges river in Benares at this time. Swamiji was successful with the healing process - a fire ceremony with many enlightened Brahmins present.

He lived in the same house until about 1322 B.S. (1916 A.D.). People came from near and far to receive instruction in Kriya Yoga and he had many disciples, whom he was keen to ensure that they completed their kharmic duties as well.

He left the Maharana's house and spent his remaining 3 years, when he was not in the best of health, resisting attempts to have an ashram built, moving about until his last days in Rishikesh, where he did establish a hermitage (Yogananda, 1946, p.294.

This included a visit of a few days to Paramahansa Yogananda's Ranchi school, in 1918, where Swamiji was to say "Joy comes to my heart, to see that Lahiri Mahasaya's ideals for the proper training of youth are being carried on in this institution. My guru's blessings be on it" (Yogananda, 1946, p.292). A short time later Yogananda visited Swamiji with his father in his temporary abode in Calcutta, a prediction that Swamiji had made to Yogananda when they met in 1905.

He made his Yogic transition on the day before Jagadhatri puja in 1919[4]. For more details of how he did this, its connection with Kriya Yoga and his rebirth see Yogananda, 1946, pp.294-6.

Is Swami your ancestor? Please don't go away!

ask our community of genealogists a question.
Sponsored Search by Ancestry.com
DNA
No known carriers of Swami's ancestors' DNA have taken a DNA test. 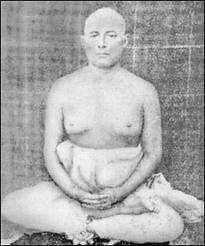