Saradamani was born on 22 December 1853. The excellent Wikipedia article has other first names as Khemankari/ Thakurmani/ Saradamani Mukhopadhyay, and the location of her birth as Joyrambati, in Bengal, when the country was referred to as British India. Her parents, Ramachandra Mukhopadhyay and Shyama Sundari Devi, were poor, with her father Ramchandra a farmer and carrying out priestly duties. According to traditional accounts, Ramachandra and Syama Sundari had visions and supernatural events foretelling the birth of a divine being as their daughter.

When she was only 5 years old, she was betrothed to Ramakrishna Paramahansa, who was 23, in May 1859, presumably at her families home in Joyrambati (?) though the location is not given, but did not see him again until she was 14 years old, when she stayed with him for 3 months at Kamarpukur, where he gave her instructions on meditation and spiritual life. As a child of a village farming family she had not had any formal education but was very interested in Hindu folklore and stories and learned to serve others. When she was 18, in 1872, she chose to join her husband at Dakshineswar, where he was living at the Kali Temple.

She stayed in a small room on the ground floor of the Music Tower until 1885, with occasional visits to her home. As Ramakrishna, a Priest, had become a Sannyasin, the marriage was not consummated, and he regarded her as an incarnation of the Divine Mother. Dr C.S. Shah describes their marriage as "an example of 'union of two souls', and not of two bodies in usual sense as we understand"[1]. When asked about the purpose of their marriage by Sri Ramakrishna, Sarada Devi replied "I have come to help you in your efforts to seek God. By forcing physical relationship, I do not want to drag you down to the sensate worldly plane" (op.cit.).

When Ramakrishna made his transition in August 1886, "She remained the spiritual guide of the movement for the next 34 years", until her transition on 20 July 1920 at Bagbazar, Calcutta. The story of her life during that period is well covered by the Wikipedia: Sarada Devi article, which has a section on her 'Impact and legacy'. This includes her advocacy of education for women, with her dream - a girls' school on the Ganges, where Eastern and Western pupils could study together. Sri Sarada Math and Ramakrishna Sarada Mission, a monastic order for women was founded in the honour of Sarada Devi. Swami Vivekananda wrote a letter to her to get her opinion about his intention to attend the Parliament of Religions in Chicago. Only after receiving the blessing from her did he decide to go to America.

Her last advice was "But I tell you one thing—if you want peace of mind, do not find fault with others. Rather see your own faults. Learn to make the whole world your own. No one is a stranger my child: this whole world is your own!"

Is Saradamani your ancestor? Please don't go away!

ask our community of genealogists a question.
Sponsored Search by Ancestry.com
DNA
No known carriers of Saradamani's ancestors' DNA have taken a DNA test. 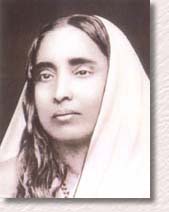