This is William "Mayflower Compact" Mullins.

William Mullins was born about 1572 in Dorking, Surrey, England, son of John Mullins and Joanne Bridger of Dorking parish,[1] located about 21 miles south of London. John Mullins died in February 1583/84 and his widow Joane married secondly Vincent Benham on November 1, 1585. The Dorking Register shows baptisms, marriages and burials of persons with the name of “Mullyns” between 1571 and 1585 and then a gap in those names of about twenty-five years until more names of this family appear.[2]

The first mention of William Mullins in Dorking records was on October 4, 1595, when he was fined, at about age 23, two pence by the manorial court for non-attendance at that year’s session. That record states that he was then residing in the Chippingborough district of Dorking. Records note a William Mullins named on a 1596 muster list for Stoke, near Guildford, co. Surrey, where it is believed he was living at that time, and returning to Dorking about 1604.[3]

While in Guildford it is believed that Mullins married for a first time, name of wife unknown. During that time, it is also believed that his first wife gave birth to at least one daughter, name Elizabeth, with baptism recorded at Holy Trinity Church, Guildford on December 11, 1598. Elizabeth may have died young. Authors Caleb Johnson and Charles Edward Banks have indicated that this unnamed wife may have given birth to a son and daughter prior to the 1598 birth of Elizabeth.[4]

William brought his wife Alice and children Priscilla and Joseph on the Mayflower; he also brought over 250 shoes and 13 pairs of boots, his profession being a shoemaker. He died on 21 February 1620/1, during the first winter at Plymouth, as did his wife and son Joseph. His original will has survived, written down by John Carver the day of Mullins' death. In it he mentions his wife Alice, children Priscilla and Joseph, and his children back in Dorking, William Mullins and Sarah Blunden. He also mentions a Goodman Woods (likely a reference to the Wood family in Dorking), and a Master Williamson, who have not been identified. It was witnessed by the Mayflower's captain Christopher Jones, the Mayflower's surgeon Giles Heale, and Plymouth's governor John Carver.[5]

Records for Dorking dated October 5, 1604, again name William Mullins, then residing in the Eastborough district there where he was the head of a “frankpledge” – a group of ten families bonded to the king for their good behavior. And if one member of the group was fined or punished, all members would be punished, which is what happened on September 19, 1605 when Mullins and his frankpledge were fined for an unknown transgression.[6]

In May 1619 Mullins sold his Dorking Manor holdings to Ephraim Bothell/Bothall for 280 pounds, which may have been a precursor of his preparations for the Mayflower voyage. It appears he made a good living as a shoemaker as his was one of the larger investments in the Merchant Adventurers group, of which he was a member, which was investing in the Pilgrim venture. His will shows he had nine shares of stock in the Merchant Adventurers and that his estate consisted primarily of boots and shoes.[7]

The London businessmen known as the Merchant Adventurers, under the direction of Thomas Weston, invested in the Mayflower voyage from the very beginning. The documents drawn up, and approved by members of the Leiden church, imposed certain restrictions on the Pilgrims work week, to which they agreed. But as the time to depart England drew near, the Adventurers wanted the restrictions tightened which would have caused the Pilgrims to work almost 7 days a week, in an effect to increase profits, without such as due time for religious activities. The Pilgrims balked at this and refused to agree to the new terms. William Mullins played a part in these deliberations, probably because he had a large investment and needed to ensure a satisfactory return on it, as an Adventurers member. And although Robert Cushman, who had been the Leiden agent for Mayflower voyage preparations, came to Plymouth in November 1621 to try to settle the rift between the Pilgrims and the Adventurers, it was never resolved. Eventually the Pilgrims bought out the Adventurers and formed their own investment company.[8]

When the Mullins family boarded the Mayflower, they consisted of William, then about age fifty, his wife Alice, daughter Priscilla and son Joseph. They boarded the ship with the London contingent, and not as part of the Leiden religionists. Mullins was a shoemaker and businessman, and carried with him a large stock of boots and shoes. Accompanying the family was their indentured servant, Robert Carter. The family had left behind in Dorking the two eldest children, Sarah, about age 22 and probably married, and William, possibly in his late 20s and married. These two older children may have been borne by a first wife of Mullins. His daughter Sarah, married to _____ Blunden, was his estate administrator, as requested in Mullins' will.

William Mullins' wife's first name was Alice. There has been some speculation that her maiden name was "Atwood". This has been disproven.[9][10]

Recording those on board the Mayflower, William Bradford wrote of Mullins as “Mr. William Mullins”, possibly due to his being somewhat more prosperous than many of the original settlers: “Mr. William Mullines, and his wife, and *2* children, Joseph and Priscila; and a servant, Robart Carter.”

The Mayflower departed Plymouth, England on September 6/16, 1620. The small, 100-foot ship had 102 passengers and a crew of about 30-40 in extremely cramped conditions. By the second month out, the ship was being buffeted by strong westerly gales, causing the ship‘s timbers to be badly shaken with caulking failing to keep out sea water, and with passengers, even in their berths, lying wet and ill. This, combined with a lack of proper rations and unsanitary conditions for several months, attributed to what would be fatal for many, especially the majority of women and children. On the way there were two deaths, a crew member and a passenger, but the worst was yet to come after arriving at their destination when, in the space of several months, almost half the passengers perished in cold, harsh, unfamiliar New England winter.

On November 9/19, 1620, after about 3 months at sea, including a month of delays in England, they spotted land, which was the Cape Cod Hook, now called Provincetown Harbor. After several days of trying to get south to their planned destination of the Colony of Virginia, strong winter seas forced them to return to the harbor at Cape Cod hook, where they anchored on November 11/21 1620.

Both Johnson and Banks believe that William Mullins married twice, with the name of his first wife being unknown. It is also believed that his daughter Priscilla and son Joseph were the only children of his second wife Alice.

Children believed of the first marriage

Children believed of the second marriage

In the name of God Amen: I comit my soule to God that gave it and my bodie to the earth from whence it came. Alsoe I give my goodes as followeth That fforty poundes in the hand of goodman Woodes I give my wife tenn poundes, my sonne Joseph tenn poundes, my daughter Priscilla tenn poundes, and my eldest sonne tenn poundes Also I give to my eldest sonne all my debtes, bonds, bills (onelye yt forty poundes excepted in the handes of goodman Wood) given as aforsaid wth all the stock in his owne handes. To my eldest daughter I give ten shillings to be paied out of my sonnes stock Furthermore that goodes I have in Virginia as followeth To my wife Alice halfe my goodes & to Joseph and Priscilla the other halfe equallie to be devided betweene them. Alsoe I have xxj dozen of shoes, and thirteene paire of bootes wch I give into the Companies handes for forty poundes at seaven years and if thy like them at that rate. If it be thought to deare as my Overseers shall thinck good And if they like them at that rate at the divident I shall have nyne shares whereof I give as followeth twoe to my wife, twoe to my sonne William, twoe to my sonne Joseph, twoe to my daugher Priscilla, and one to the Companie. Allsoe if my sonne William will come to Virginia I give him my share of land furdermore I give to my twoe Overseers Mr John Carver and Mr Williamson, twentye shillinges apeece to see this my will performed desiringe them that he would have an eye over my wife and children to be as fathers and freindes to them; Allsoe to have a speciall eye to my man Robert wch hathe not so approved himselfe as I would he should have done.

This is a Coppye of Mr Mullens his Will of all particulars he hathe given. In witnes whereof I have sett my hande John Carver, Giles Heale, Christopher Joanes.

[Followed by, translated from the Latin]: In the month of July Anno Domini 1621. On the 23rd day issued a commission to Sarah Blunden, formerly Mullins, natural and legitimate daughter of William Mullins, late of Dorking in the County of Surrey, but deceased in parts beyond the seas, seized &c., for administering the goods, rights and credits of the said deceased, according to the tenor and effect of the will of the said deceased because in that will he named no executor. In due form &c. swears.[13]

Wife not Priscilla Coolman Caleb Johnson. speculated that "Because of her name "Priscilla" and her connection to a Hammon family, she might make an interesting candidate for a first wife of William Mullins." He doesn't suggest the relationship is proven.[14]

From Find A Grave: Memorial #28971892
He is buried on the hillside above Water St.just overlooking Plymouth Rock...A sarcophagus is situated there with many people that died the first winter. William, Alice, his wife, and their son are buried in that memorial. The Pilgrims buried their dead at night in shallow graves so that the Indians would not know how many of them had died that first winter. Later the monument was built and the remains of the first winters dead were placed there on the hillside. I have been to the grave in Plymouth on a cold, windy day and it is very sobering to think of what they endured as they settled in this new land.

Images: 1
Signer of the Compact 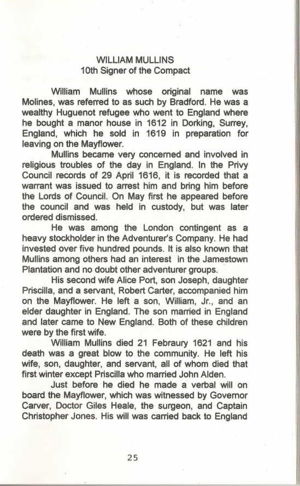 Anne B
Priscilla coolman has been removed.
posted Apr 07, 2019 by Anne B

Robin Lee
I agree that she should be removed. The only documented place that you see Priscilla as his first wife is in the work by Caleb Johnson. I wrote to him and he indicated that it was "total speculation" on his part and he has never found anything to confirm it.
posted Mar 29, 2019 by Robin Lee
Sheila Stahl
I agree about disconnecting Priscilla as the first wife of William until further research is done.
posted Mar 29, 2019 by Sheila Stahl

Anne B
I've reviewed the article that suggests Priscilla Coolman. "Because of her name Priscilla and her connection to a Hammon family, she might make an interesting candidate for a first wife of William Mullins."

This is speculation on Johnson's part and really should not be listed here. Mention and linked in the bio would be appropriate, but she should be disconnected.

Martha Garrett
in the Millennium File