Norwegian painter. His best known work, The Scream, is one of the most iconic images of world art.

The family moves to Christiania in 1864 when Christian Munch is appointed medical officer at Akershus Fortress.[3] Edvard's mother dies of tuberculosis in 1868, as did Munch's sister Johanne Sophie in 1877. After their mother's death, the Munch siblings are raised by their father and by their aunt Karen.

In 1879, Munch enrolls in a technical college to study engineering, where he excels in physics, chemistry and math. The following year, Munch leaves the college to become a painter. His father views art as an "unholy trade". Munch adopts an undogmatic stance toward art.

In 1881, Munch enrolls at the Royal School of Art and Design of Kristiania. That year, Munch demonstrates his quick absorption of his figure training at the Academy in his first portraits, including one of his father and his first self-portrait. In 1883, Munch takes part in his first public exhibition.

Munch arrives in Paris during the festivities of the Exposition Universelle in 1889.

In December 1889 his father dies, leaving Munch's family destitute. He returns home and arranges a large loan from a wealthy Norwegian collector when wealthy relatives fail to help, and he assumes financial responsibility for his family from then on. Christian's death depresses him and he is plagued by suicidal thoughts.[4]

By 1892, Munch formulates his characteristic, and original, Synthetist aesthetic, as seen in Melancholy (1891). In 1892, Adelsteen Normann, on behalf of the Union of Berlin Artists, invites Munch to exhibit at its November exhibition. However, his paintings evoke bitter controversy (dubbed "The Munch Affair"), and after one week the exhibition closed.

During his four years in Berlin, Munch sketches out most of the ideas that would comprise his major work, The Frieze of Life. He sells little, but makes some income from charging entrance fees to view his controversial paintings.

The Scream is Munch's most famous work, and one of the most recognizable paintings in all art. It has been widely interpreted as representing the universal anxiety of modern man. The Scream exists in four versions: two pastels (1893 and 1895) and two paintings (1893 and 1910). There are also several lithographs of The Scream (1895 and later).

In December 1893, Unter den Linden in Berlin is the location of an exhibition of Munch's work, showing, among other pieces, six paintings entitled Study for a Series: Love. This began a cycle he later called the Frieze of Life—A Poem about Life, Love and Death. Frieze of Life motifs, such as The Storm and Moonlight, are steeped in atmosphere.

Around the start of the 20th century, Munch works to finish the "Frieze". He paints a number of pictures, several of them in bigger format and to some extent featuring the Art Nouveau aesthetics of the time.

"The Frieze of Life" themes recur throughout Munch's work but he especially focuses on them in the mid-1890s. He taps the depths of his feelings to examine his major motifs: the stages of life, the femme fatale, the hopelessness of love, anxiety, infidelity, jealousy, sexual humiliation, and separation in life and death. These themes are expressed in paintings such as The Sick Child (1885), Love and Pain (retitled Vampire; 1893–94), Ashes (1894), and The Bridge.

In 1896, Munch moves to Paris, where he focuses on graphic representations of his Frieze of Life themes. He further develops his woodcut and lithographic technique. Munch's Self-Portrait with Skeleton Arm (1895) is done with an etching needle-and-ink method. Munch also produces multi-colored versions of The Sick Child. His financial situation improves considerably and in 1897, Munch buys himself a summer house facing the fjords of Kristiania.

In 1897 Munch returns to Kristiania, where he also receivesd grudging acceptance. In 1899, Munch begins an intimate relationship with Tulla Larsen. They travel to Italy together and upon returning, Munch begins another fertile period in his art, which included landscapes and his final painting in "The Frieze of Life" series, The Dance of Life (1899). Larsen is eager for marriage, and Munch begs off. His drinking and poor health reinforced his fears of marriage. Munch almost gives in to Tulla, but flees from her in 1900, and moves to Berlin.

In 1902, he displays his works thematically at the hall of the Berlin Secession.

Munch's self-destructive and erratic behavior involves him first with a violent quarrel with another artist, then with an accidental shooting in the presence of Tulla Larsen, who returns for a brief reconciliation, which injures two of his fingers. Munch later saws a self-portrait depicting him and Larsen in half as a consequence of the shooting and subsequent events.She finally leaves him. Munch takes this as a betrayal, and he dwells on the humiliation for some time.

In 1903–04, Munch exhibits in Paris. In 1906, he paints the screen for an Ibsen play in the small Kammerspiele Theatre located in Berlin's Deutsches Theater, in which the Frieze of Life was hung. After an earlier period of landscapes, in 1907 he turns his attention again to human figures and situations.

In the autumn of 1908, Munch's anxiety, compounded by excessive drinking and brawling, had become acute. Munch's stay in hospital stabilizes his personality, and after returning to Norway in 1909, his work becomes more colorful and less pessimistic. Further brightening his mood, the general public of Kristiania finally warmed to his work, and museums began to purchase his paintings. He is made a Knight of the Royal Order of St. Olav "for services in art". His first American exhibit was in 1912 in New York.

Given his poor health history, during 1918 Munch felt himself lucky to have survived a bout of the Spanish flu, the worldwide pandemic of that year.[5]

In 1940, the Germans invaded Norway and the Nazi party took over the government. Munch lives in fear of a Nazi confiscation.

Munch dies in his house at Ekely near Oslo on 23 January 1944, about a month after his 80th birthday.[6] His Nazi-orchestrated funeral suggested to Norwegians that he was a Nazi sympathizer, a kind of appropriation of the independent artist. He is buried at Vår Frelsers gravlund in Oslo, Oslo kommune, Oslo fylke, Norway.[6]

Is Edvard your ancestor? Please don't go away!

ask our community of genealogists a question.
Sponsored Search by Ancestry.com
DNA
No known carriers of Edvard's ancestors' DNA have taken a DNA test. 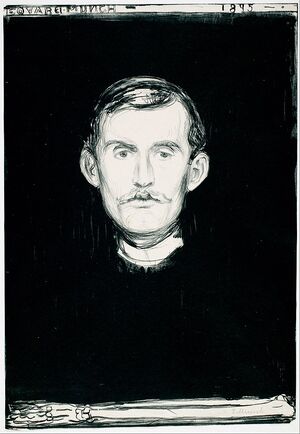 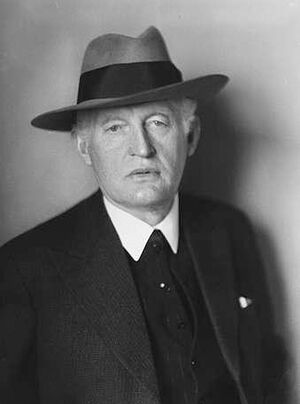